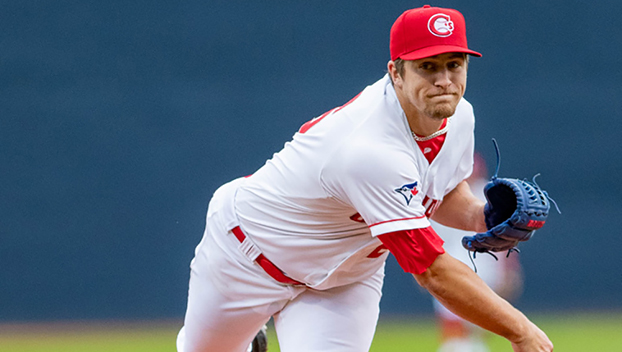 PASCO, WA – When Chad Dallas was a kid growing up in Orange, he didn’t imagine that his first start as a professional would come on a near-freezing April night in southeastern Washington.

No matter: the Blue Jays prospect delivered a memorable first turn with five no-hit innings to lead the Vancouver Canadians to a 3-0 win over the Tri-City Dust Devils (Angels) on Wednesday night at Gesa Stadium.

Dallas, 21, hadn’t thrown a pitch in a game that counted since the seventh inning of game one of the College World Series last year for Tennessee, when he went six and a third against Virginia.

He took the loss that night, but the Blue Jays bet on him with their fourth-round selection a few weeks later, which put him on the path that brought him to Pasco.

The right-hander walked the first batter of the game, then proceeded to set down 15 consecutive hitters by masterfully commanding all five of his pitches. 11 of the 16 batters he faced received a first pitch strike, and only five managed to work a three-ball count.

“In the bullpen not many of my pitches were finding the zone, but I knew once I got a batter in there I would feel more comfortable,” Dallas said after the game.

“[With] the first hitter, I think I was trying to do too much and tried to do it all myself, so that’s when I realized I have a lot of people behind me. I started filling up the zone with all my pitches and let whatever was going to happen, happen. The slider to righties was on – front door then let it leak out to the outside of the plate – and the curveball to lefties [worked well].”