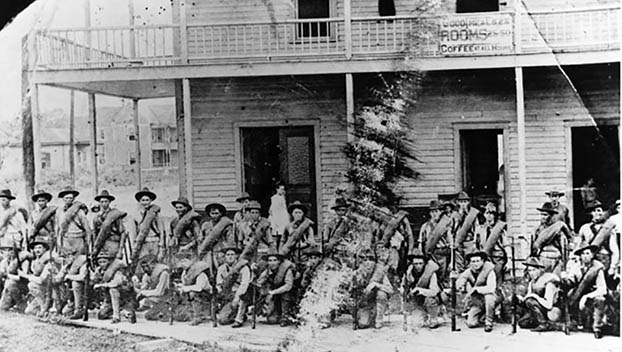 The Orange Rifles are pictured in 1904. (Courtesy photo)

An early article about Orange said that the row of neat white houses along the riverbank made Orange appear to be a placid place to live.

At times Orange was placid and laid back, other times in the mid to late 19th Century, Orange was violent and turbulent.

For several reasons, one of which was to assist Orange law enforcement, a militia company was organized. The Texas Militia Bill of 1870 provided for the organization of a Texas Volunteer Guard.

The company in Orange was named the Orange Rifles. It was under the command of a major named Norsworthy and Dr. S.W. Sholars. Another Sholars, Dr. A.R. Sholars, received his first training as a private and later became the captain of the company.

Orange had turbulent times that included riots and the murder of a deputy sheriff, Sam Deputy, who was ambushed and shot when rowing his skiff to his home on the Shellbank.

County Sheriff George Michel was shot and severely wounded when a riot broke out. The Orange Rifles were called out for riot duty. The company was under the command of Major Norsworthy and Captain S.W. Sholars and commended for its service.

In May 1898 the company was reorganized, and a new group of officers was commissioned by the governor. About this time the company responded to the second call for volunteers for the Spanish-American War.

The company was assigned to the Fourth Texas Regiment, U.S. Volunteer Service in July 1898. The company at that time consisted of 100 men and three officers.

The intent was to send the unit to the Philippines. They were sent to San Antonio to be readied for overseas service. Before the training was completed, it was found there was no need for the regiment in Manila.

The unit was held in San Antonio for the winter awaiting orders. The winter of 1898-99 was the coldest on record at that time. The Orange Rifles had only canvas tents for shelter. The unit made it through the winter, but one man was lost.

The first encampment of the company was in 1903 at Austin. They performed so well in maneuvers that they were sent to the army maneuvers in Manassas, Virginia.

In 1905 the National Militia Act brought all state militia units under federal control and made them part of the U.S. Army.

As a part of the National Guard beginning in 1905, the unit served in several Mexican police actions. During World War I and World War II, the unit was nationalized and served for the duration of each war.

As a unit of the National Guard, Orange had an armory and equipment for several decades. The name of the unit and its function changed several times.

Eventually due to military cutbacks, the National Guard unit in Orange was disbanded. Today the armory building remains on Meeks Drive as a service center for the City of Orange.