A Big Red tradition like no other: Lady Cardinals track brings back the bling 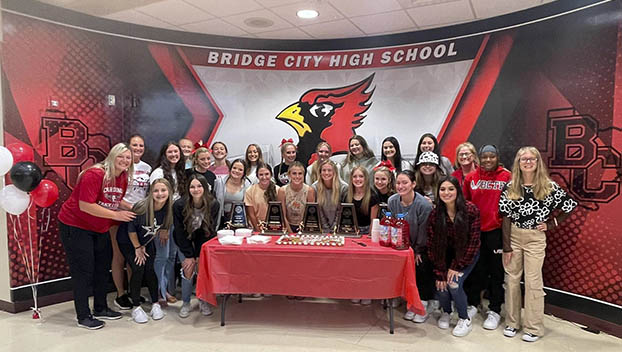 BRIDGE CITY – You can turn the calendar up every year, but sometimes things remain the same.

For the fifth straight time, the Lady Cardinals leaped, tossed and ran their way to another District 22-4A Track & Field team championship trophy.

The Lady Cardinals racked up 133 points in Lumberton this week, winning the title by 22 points.

“It was so awesome to get another one,” coach Jamie DeShazo said. “The kids take a lot of pride in keeping the streak going. I’m just super proud of them because they have put in so much work.”

So much has led to the success of the program, not only having special student-athletes but consistency and getting athletes to come out has been a major key.

“In 2016 we built a model in which we wanted to get as many kids out as possible,” DeShazo said. “We wanted to build kids up where they could participate in multiple events. It’s not unusual for us to have a thrower that can go out and run the sprints or be involved in relays.”

Of course, doing that leads to points piling up in a hurry with a deep and talented team.

“It’s all about being deep and multi-pointing,” DeShazo said. “In 2017 when we won it. We didn’t have a first-place individual finish but we pointed in all 17 events and multi-pointed in 14 of them. That’s when we really realized we had something special and we’ve kept that system going.”

Points pile up even faster when you have amazing athletes. DeShazo has been fortunate.

Like this season, Caryss Carpenter captured High-Point Girl honors at the 22-4A Championships as the senior standout. She has signed to compete for Sam Houston State next season and won four events that included the high jump, long jump, triple jump and the 100-meter hurdles.

“It’s always good to have those amazing athletes like Caryss,” DeShazo said. “You get special ones like that from time to time, and it’s a big boost. Like this year, we had Caryss, Morgan Louvier and Kaylyn Dosch scoring multiple points in multiple events. That is huge.”

And of course, it always starts at the sub-varsity levels. The Lady Cardinals at the junior high level are stacked with depth and it has shown.

“I think we have won four of the last six district meets at the junior high level and that is where it all starts with getting kids out there,” said DeShazo. “Our junior varsity team has won the last five district championships, too.”

The Lady Cardinals celebrated their district title with a little party at the school Wednesday that DeShazo helped organize.

“It was so much fun and it’s something we like to do each year because they certainly deserve it,” she said. “These kids are so competitive and love what they do, and they all care for each other. It’s awesome.”

And don’t think the Lady Cardinals don’t now how competitive their coach is either.

“It should be six straight,” DeShazo said. “We were stacked during the COVID year that canceled everything. We were so deep and talented in every event. I felt for those seniors that season. In our heads, we still count that one too.”