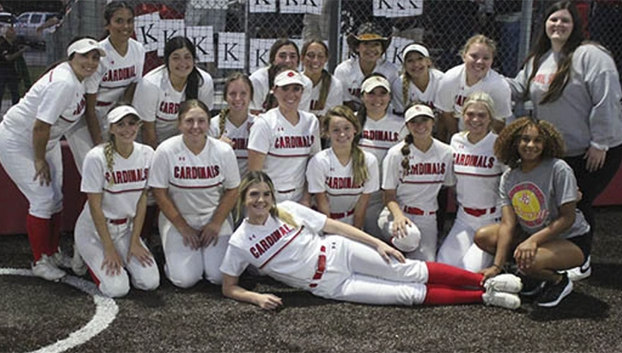 The Lady Cardinals, behind a no-hitter, 20-strikeout performance from ace pitcher Carson Fall, defeated the Silsbee Lady Tigers 7-0 to claim the outright District 22-4A softball crown.

The Lady Cardinals improved to a perfect 11-0 in district play, and it marks the 18th district crown in the program’s history.

The Lady Tigers (3-7 in district) simply had no answer for Fall, who wore them down with some major heat, smoking rise balls and potent changeups.

Silsbee pitcher Madie Konstantine was the only Lady Tigers player to stand on the bases after she drew a walk in the top of the second inning.

The Lady Cardinals picked up nine hits against Konstantine, who pitched well until giving up four runs in the bottom of the sixth. She finished with four strikeouts and two walks.

Bridge City got the only run it actually needed in the bottom of the first. Makenna Carey drew a one-out walk. Brooklyn Droddy then laced a single to center and Carey was able to scoot home after an errant pickoff attempt at third.

The Lady Cardinals scratched in a run in the second inning. Olivia Hornsby ripped a two-out single to right, swiped third and scored on a wild pitch.

The Lady Cardinals got busy in the bottom of the sixth.

Droddy had a leadoff single to center and Fall reached on an error. Hannah Murchison singled to center to load the bases. Laurie Barg brought in a run on a RBI groundout and the Lady Cardinals made it 5-0 after a Silsbee throwing error.

Dosch capped the scoring with a two-run single to shallow centerfield.

Thee Lady Cardinals will step out of 22-4A play Tuesday by taking on Hamshire-Fannett before closing out 22-4A play next Friday against Lumberton.

Bobcat baseball chimes in at No. 8 in latest…