VAN WADE — Jake Lemoine makes us all proud with MLB call; time to welcome Lamar back 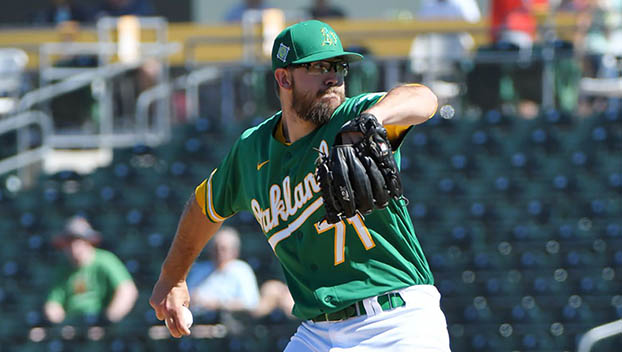 It was a tremendous week for former Bridge City baseball standout Jake Lemoine after he found out he was being called up to the Majors by the Oakland Athletics.

To be able to watch that young man grow and prosper over the years has been a true treat.

To see him persevere and make it to the “Bigs” is even more special.

After a solid stint at the University of Houston, Jake suffered an injury and had rotator cuff surgery before joining the Texas Rangers organization.

After that, he had a solid run at the Double and Triple-A levels for the Rangers organization and then the COVID-19 pandemic reared its ugly head, canceling the 2020 Minor League season.

Jake kept battling through the obstacles and had a superb season at the Rangers’ Triple-A squad in Round Rock in 2021. Despite the Rangers having such a bad season, they never gave Jake the call-up to the Majors, which seemed to be a no-brainer.

After toiling with the Rangers for so long, Lemoine opted to sign as a free agent with the Athletics in January, and everything turned into a rapid progress as the flamethrower finally realized his dream when the Athletics called him up 10 days ago.

He got his feet wet in the A’s opener in Philadelphia, tossing one inning and giving up a hit, two walks and an earned run. Now he can settle in and let it fly after pitching in a hostile Major League park for the first time.

What a pleasure it was to see the smile on his grandfather, Jerry McInnis,’ face at the Bridge City-LC-M softball game last week when he knew his grandson got the call-up.

As for now, Orange Countians far and wide should be so proud of the achievement, after all, Lemoine is the first Bridge City player to ever make it to MLB.

Lemoine is in rare air as one of the few Orange County baseballers that have played in the MLB. I’m sure former local MLB players Andre Robertson from West Orange High School and Bruce Aven and John Patterson from West Orange-Stark are super happy about Lemoine’s rise to the “Bigs.”

And now for the “I told you so” segment.

Guess who is coming back to the Southland Conference.

The sad thing is, the Redbirds will still have to toil in the Western Athletic Conference for one more season before getting back to the SLC for the 2023-24 campaign.

Why Lamar University and its powers-that-be thought the athletic programs needed to move to the WAC was always absurd to me. They constantly think that the university is capable of moving up and playing in big-time conferences. Some reason they think they can eventually have an FBS football program.

Shouldn’t you be able to beat the likes of Tarleton State or Abilene Christian before you start battling Alabama or even South Alabama. Sam Houston State may be ready for the “big boys,” but Lamar is far from it.

The basketball team went 2-27 and didn’t defeat a NCAA D-1 opponent during the most recent season.

No doubt, growing up in Southeast Texas, I know Lamar Athletics is a “tough sell.” Lamar fans are fickle, unless the Cardinals are winning.

The Lamar University System needs to step its game up and get athletics back rolling to get more area people to want to go see their product.

The national search is still on for a new Athletic Director and hopefully it will be a tremendous choice.

Seeing McNeese State, Northwestern State, Nicholls State, Texas A&M-Commerce and Texas A&M-Corpus Christi back on the schedule sure will be great. And who knows, maybe Stephen F. Austin will head back our way.

It’s time to stop trying to be Texas A&M or Texas, and just be plain ole’ Lamar University. I honestly feel that’s what the true fan base wants.