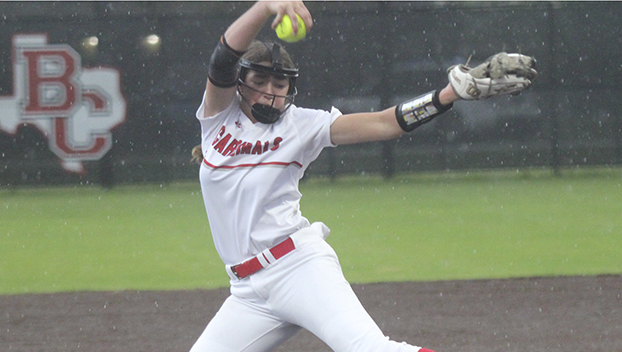 Bridge City ace Carson Fall held the Lady Bobcats (3-6 in district) hitless through the five innings while striking out 12.

Kaylyn Dosch was 4-for-4 at the plate for the Lady Cardinals, drove in a run and scored three times.

Nicole Sasser contributed a double with a RBI and a run scored. Fall finished with two RBI while Marlie Strong and Olivia Hornsby drove in a run apiece.

The Lady Cardinals will host Silsbee for Senior Night Thursday while Orangefield plays host to Lumberton.

Cami Shugart got the win on the mound for the Lady Bears (now 8-2 in 22-4A play), allowing two hits while striking out four and walking three in 3 1/3 innings. Jacelyn Cook tossed the final 1 2/3, allowing a hit while fanning two.

Rhylan Wilson went 3-for-3 at the plate for LC-M, with a double and five runs batted in and scored twice.

Keylie Washburn was 3-for-4 and blasted a home run. She finished with four RBI and four runs scored.

Lexi Moss was 2-for-3 with a RBI and scored four times while Shugart was 2-for-4 with a double, two RBI and a run scored.

The Lady Bears have a bye at the end of this week before hosting Vidor next Tuesday while the Lady Mustangs (0-10 in district), visit Vidor Thursday.