Bobcats run 22-4A win streak to seven in Bridge City 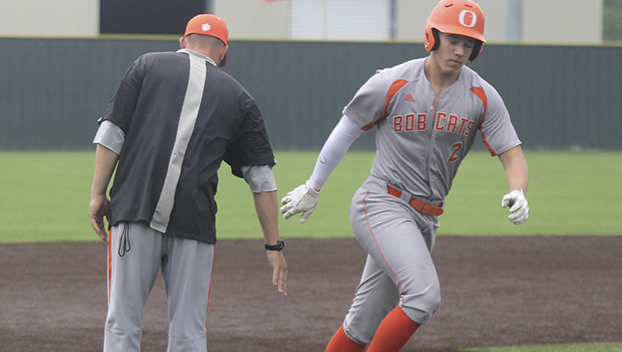 Orangefield’s Kolbie Sowell gets congratulated by Coach Tim Erickson after he belted a solo home run against Bridge City in the third inning Tuesday evening at Cardinal Field.(Van Wade/Orange Leader)

BRIDGE CITY – Pushing their District 22-4A record to 7-1, the Orangefield Bobcats got past the Bridge City Cardinals 8-3 at Chuck Young Field Tuesday evening.

The Bobcats (18-1) snagged a run in the top of the second inning on a bases-loaded walk.

Kolbie Sowell made it 2-0 Bobcats when he blasted a solo home run over the leftfield wall in the top of the third.

The Cardinals (14-6, 5-3) scratched in a run in the bottom of the third when Deegan King singled to right and scored on a two-out single to left by Ethan Oceguera.

The Bobcats tallied four runs in the top of the fifth.

Kyle Michael doubled to left and Sowell was hit by a pitch and both runners would advance into scoring position after a wild pitch. Jason Bodin drew a walk to load the bases.

Brennon Lecoq drew a bases-loaded walk to bring in a run and then Trent Eaves slapped a RBI single to right to make it 4-1. The Bobcats added the other two runs after a nice squeeze bunt RBI by Caleb Fregia and a sacrifice fly to right by Kameryn Henderson.

Eaves was credited with the victory for the Bobcats. The lefty went four innings, allowing one run on four hits and striking out two. Cooper Longron and Sowell entered the game out of the bullpen and helped to close out the game in relief.

King and Justin Abate each had multiple hits for Bridge City.

The Bobcats return home Thursday to face Lumberton while the Cardinals travel to Silsbee Thursday.