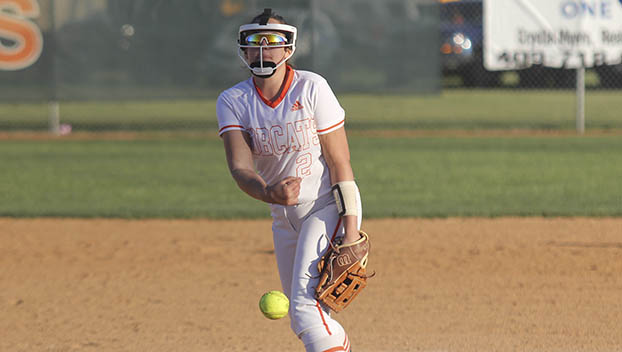 VIDOR – The Bridge City Lady Cardinals remain perfect in District 22-4A play after a 12-0 road win in five innings over the Vidor Lady Pirates Friday night.

Carson Fall nabbed another win on the mound for the Lady Cardinals (9-0 in district), striking out 12 in five innings of work.

Kaylyn Dosch was 3-for-4 at the plate with a double and three runs batted in. Makenna Carey was also 3-for-4 with a RBI.

Hanna Murchison went 2-for-3 with a triple and two RBI. Nicole Sasser was 2-for-3 and scored twice. Marlie Strong and Haley Munoz each had a double and drove in a run apiece while Brooklyn Droddy also had a RBI.

The Lady Cardinals will play host to Orangefield on Tuesday.

Cami Shugart went the distance on the hill for the Lady Bears, who improved to 7-2 in 22-4A play. She scattered four hits while striking out five and walking one.

Shugart was also 2-for-4 at the plate with a triple and drove in a run.

Lexis Moss was 2-for-4 with two doubles, two runs scored and a RBI. Ansley Moore went 2-for-3 with two RBI and a run scored. Jacelyn Cook laced a triple and scored.

ORANGEFIELD – The Silsbee Lady Tigers rallied from a 3-2 deficit in the top of the seventh inning with four runs and then held off the Orangefield Lady Bobcats 6-5 in District 22-4A action at Lady Bobcat Field Friday night.

Trailing 6-3 heading into the bottom of the seventh, Orangefield received a two-run home run blast by Harleigh Rawls but the Lady Tigers were able to hang on for the win.

The Lady Bobcats (3-5 in district) will visit Bridge City Tuesday.