“And now you know” — The Orange Oil Field: 109 years old and still producing 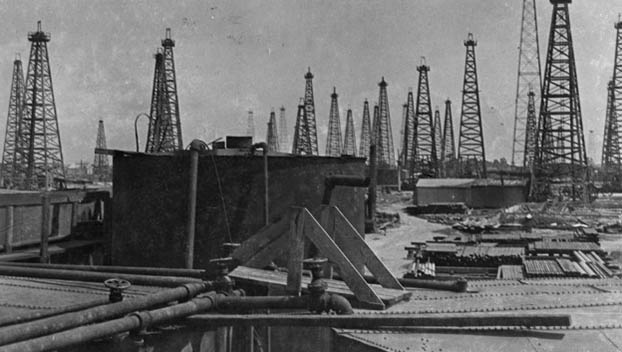 The Orangefield Oil Field seen in 1927. (Courtesy of texashistory.unt.edu)

The first mention of oil in Texas was in the records of a Spanish expedition on the Gulf Coast in 1543.

Oil was observed floating on the water between present day High Island and Sabine Pass.

Not much attention was paid to oil for the next few hundred years until the well was drilled at Spindletop in Beaumont. After that gusher, speculation began about oil along the coast of Southeast Texas.

In 1903 a well was drilled on the west bank of Cow Bayou near Orange. There was a strong sulfur smell that led to the belief that oil may have been present in the area.

The Rio Bravo Oil Company drilled the No. 1 Bland well in 1913 to a depth of 3,227 feet, the deepest well in Texas at the time. The well was called “The Wonder Well.” It produced 150 barrels of oil per day. (BPD) This well led to the discovery of what became the Orange Oil Field.

The field was a deep dome where salt was never encountered, although there was a small amount of salt water at times.

In 1921 the Humble Oil Company drilled the No. 5 Chesson on the west bank of Cow Bayou. The well came in at 15,000 BPD and started the boom in the oil field.

In December due to pressure build up, the well began to “gush.”

The Orange Daily Leader reported “The gusher is the sensation of the oil industry. Orange Field is now the wonder of the entire coast; nation wide attention is expected as a result of the deep test find.”

The No. 5 Chesson had begun to gush at a rate of 25,000 BPD through two four-inch pipes. The roar of the flowing oil could be heard for two to three miles, the column of oil was estimated to be about 300 feet high.

The marshes overflowed and Cow Bayou appeared to be a solid river of oil. Humble made efforts to recover oil from the ditches, marshes and streams in the area.

The bottom well screen had dislodged and there was a small amount of sand in the oil, but it was believed that due to the high pressure of the flow that the well would not sand up.

The Orange Oil Field became the wonder of the Gulf Coast producing territory. It met and surpassed the imagination of the boosters who had believed in the field.

For years there had been skeptics who took a dim view of the field as salt water was believed to be present in the seepage from the pool. However, the strata had already produced millions of dollars’ worth of oil. The Humble gusher removed all doubt about the field.

Hundreds of citizens made a visit to observe the gusher, travelling over deplorable road conditions and through woods. Scores of the sightseers were seen to be “oil splattered.”

Before the gusher occurred, the well had settled to a production of about 10,000 BPD average.

After noon on the day after the gusher, some control was gained when a special contrivance was placed over the top of the well to hold back some of the oil and gas pressure.

The Humble gusher brought on a rush to secure new locations and additional acreage in and near the present the field.

By 1925 the boom had ended, and drilling crews were gone, only one section crew remained in 1927.

There had been some who were not positive about the ability of the field to produce, but produce it did and it is still producing a respectable amount of oil after over a century.

“And now you know” — Mike Louviere