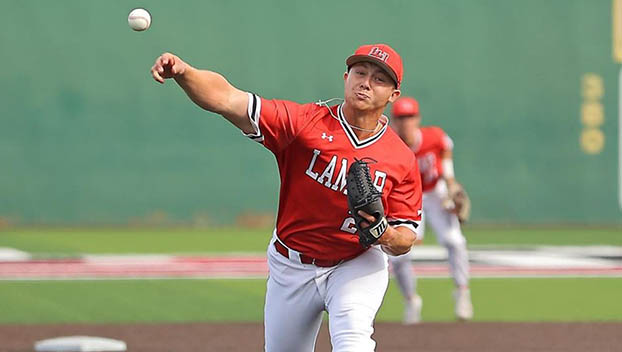 BEAUMONT– Through 7.5 innings, the line score was identical for both teams, but in the bottom of the eighth Ryan Snell homered (for the second day in row) to give Lamar University a 3-2 lead, and in the top of the ninth West Orange-Stark graduate Jack Dallas came on to slam the door shut.

Dallas earned the save – his 18th career – to set a new school record. All of that combined to give LU an exciting 3-2 victory over Abilene Christian Saturday afternoon at Vincent-Beck Stadium.

Adam Wheaton got the start for Big Red and went 6.1 innings allowing just two earned runs on six hits with two walks and four strikeouts but didn’t figure into the decision. Wheaton gave way to Daniel Cole (2-0) in the seventh and he pitched 1.2 allowing just one hit to pick up the win.

Dallas came on to pitch a scoreless ninth for his fourth save of the season.

Genner Cervantes got the start for ACU and went 4.0 innings allowing one earned run on six hits and gave way to Max Hufling who pitch the final four innings for the Wildcats.

Hufling allowed two earned runs on two hits to suffer his first loss of the season (3-1).

The Cardinals collected eight hits on the day from six different players led by 2-for-4 efforts from Kevin Bermudez and Reese Durand (both of Durand’s hits were triples).

The game was scoreless heading into the third when the Wildcats took the first lead of the game. Big Red answered back in the bottom half of the inning to tie the game up. After Ethan Ruiz led off the inning by getting hit, he was able to move over to second on wild pitch. With two outs in the inning, Durand recorded the first of his two triples on the first pitch he saw driving the ball to wall in left center.

The score remained tied at one until the top of the sixth when the Wildcats plated their second run of the game to retake the lead. But just like in the third, the Cardinals responded immediately. After Josh Blankenship drew a one-out walk, Matthew McDonald drove him home on an 0-2 pitch which he took down the left line for a double.

After the LU bullpen hung two more zeros on the scoreboard, the offense grabbed the lead for the first and final time of the game. Snell led off the inning and took the first pitch he saw over the wall in left field – almost the exact same spot as Friday night’s homer – to give the Cards a one-run lead.

The advantage would be all Big Red would need as head coach Will Davis turned the ball over to Dallas in the ninth and all the Orange, Texas native did was sit the Wildcats down in order (two strikeouts and a fly out) to move into first place all alone on the school’s all-time saves chart.