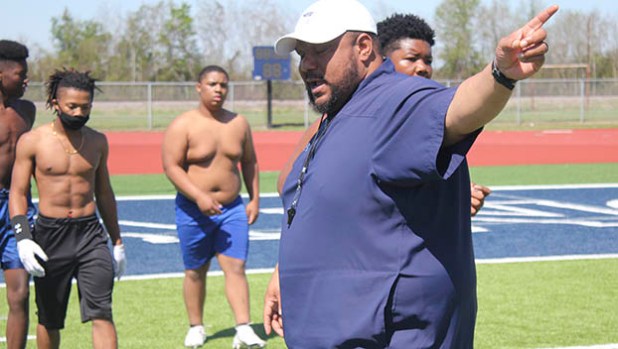 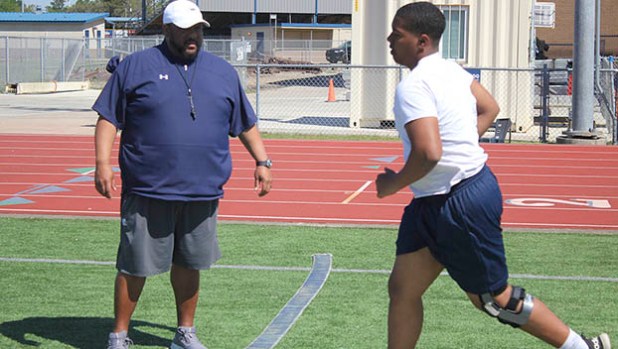 WEST ORANGE – It’s been a whirlwind for new West Orange-Stark Athletic Director and head football coach Hiawatha Hickman, and he wouldn’t have it any other way.

“It’s been so busy around here, but it has been fun getting acclimated into the position,” Hickman said. “I’ve learned a lot and will continue to learn a lot more, but everything has been going really well.”

Hickman is excited about how hard the kids have been working out in the offseason.

“The thing about kids here is when they walk through those doors, we’ve got a chance to win every game,” he said. “I’m not here to change everything they know already and try to reinvent everything they have known. We’re going to line up and play solid defense. We’re going to play offense, use the best with what we have, which is speed. I’ve always considered us as the best-conditioned team, not only in our area, but the state, too. We don’t plan on changing that. We’re making a few changes, but certainly none of them are drastic.”

Hickman wants to continue to make sure the Mustangs are well-disciplined, which has been one of the program’s trademarks.

Hickman has been busy hiring new coaches and is still continuing to interview more.

He is bringing in former Mustangs assistant Justin Trahan back as offensive coordinator.

Trahan left WO-S last season to coach at Port Arthur Memorial, where he was co-offensive coordinator and offensive line coach.

“I think Coach Trahan will help us a lot, and he’s so familiar with the kids already,” Hickman said. “He has done such a tremendous job with the offensive line in the past, and the kids all love him. He’s a good, young coach. It’s a great opportunity for him. We plan on changing our offensive philosophy a little bit. We want to go a little more up-tempo, plan on getting the ball out quicker and get it into our playmakers’ hands. We’ll still ground-and-pound when we have to, but we’re going to mix it up, and we definitely want to play faster.”

Coach Hickman has also brought in a new defensive coordinator in Tommy Barrett.

Barrett comes from Beaumont West Brook, where he served as the coordinator. Hickman has a tremendous history with Barrett.

“Tommy is a great guy and he knows what it is all about,” Hickman said. “I was fortunate enough to be one of his coaches when he played for us when I was at Silsbee. He had a good run playing for Lamar, when they cranked football back up. I’ve talked to LC-M Coach (Eric) Peevey about him. He was the secondary coach at West Brook the year Coach Peevey and the Bruins went to State. I look forward to working with these guys when they get in here full-time.”

Another move Hickman made could certainly benefit the entire WO-S athletic program.

“Cory is going to be a great asset for sure and he knows what that Mustang tradition is all about,” said Hickman. “He’s coming to us from New Mexico Military, which won the National JUCO Championship last year. He’s going to come in and go to work with all the sixth-12th graders and get it going school-wide. He’ll be great in getting our girls stronger in all the sports, which will be huge.”

Hickman has been making a tremendous effort in trying to get the overall program humming, and he feels it all starts at the young levels.

“I’ve had plenty of talks with the leaders of the ‘Lil Mustangs and our goal next year is to not only have it for football, but for volleyball, as well,” Hickman said. “We plan to host games and matches in the junior high gym. The key is to get the community involved in it and get their support. Our girls programs have shrunk so much over the years and we want to get the girls back out and on the courts and on the tracks.

“I’ve spoken a lot with Pastor (Demetrius) Moffett, and he and a few more in the community have been talking about getting an AAU basketball program going, starting them young and getting them interested. This would all be so awesome, but the community must show interest. All of this needs their backing, and hopefully we can get that.”

Now, Hickman remains eager about guiding the program and looking forward to the future.