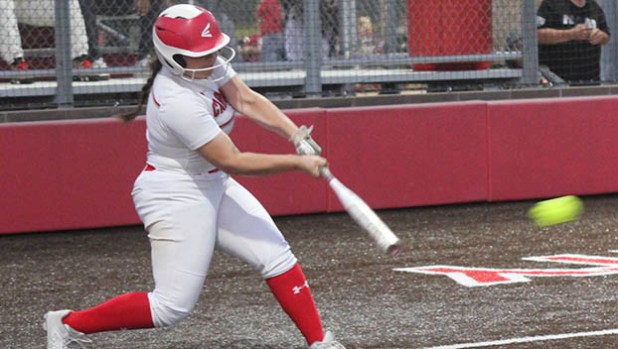 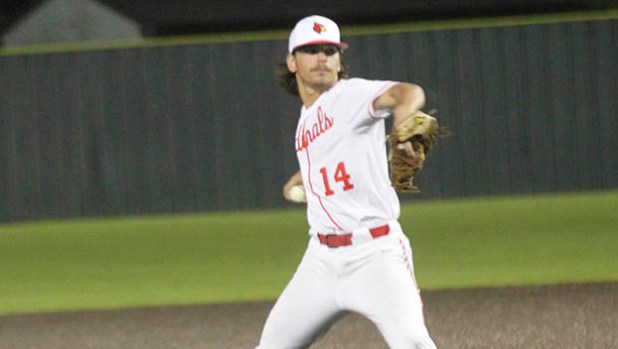 BRIDGE CITY – Getting a complete-game one-hitter and 19-strikeout performance from junior ace Carson Fall, the Bridge City Lady Cardinals started the second half of District 22-4A play with a 8-0 victory over the West Orange-Stark Lady Mustangs Friday night at Lady Cardinal Field.

The win pushes the Lady Cardinals to 7-0 in district play while the Lady Mustangs dropped to 0-7.

Fall gave up the one hit, a nice bunt by Lady Mustang Laila Rhodes in the top of the second inning.

Nataleigh Sims went the distance on te mound for the Lady Mustangs as she allowed 11 hits while striking out three and walking two.

Brooklyn Droddy who had a pair of hits and two runs batted in, drove in a BC run in the bottom of the first.

Haley Munoz stroked a deep triple in the second inning and ended up scoring on a wild pitch.

Droddy had her second RBI of the night with a single in the third.

The Lady Cardinals struck for four runs in the bottom of the fifth.

Marlee Strong, who had two hits, had a RBI single. Anna Autry followed with a two-run single. After Fall had a double, Lexi Nugier drove in the fourth run of the frame with a sacrifice fly.

Makenna Carey, who had two hits and scored three runs, finished off the scoring with a RBI groundout in the sixth.

The Lady Cardinals will visit LC-M Tuesday while the Lady Mustangs will welcome in Lumberton.

In other 22-4A action Friday night the LC-M Lady Bears (6-1 in district) squeezed out a 11-10 victory on the road against the Silsbee Lady Tigers. The Vidor Lady Pirates also went on the road and downed the Orangefield Lady Bobcats (3-4 in district) 8-1.

SILSBEE – The Little Cypress-Mauriceville Lady Bears won a nailbiter to start the second half of District 22-4A action by nipping the Silsbee Lady Tigers 11-10 in eight innings at Lady Tiger Field.

Jacelyn Cook got the win on the mound for the Lady Bears (6-1 in district). She tossed 4 2/3 innings, scattering five hits while striking out five.

Freshman Ella Stephenson had a huge outing at the plate, going 2-for-3 with five runs batted in. Jillian Brown was 2-for-3 while Ava Wright and Cami Shugart each had a hit.

Braylen Collins got the win on the mound for the Cardinals (4-1 in district) as he worked four innings, allowing just one hit while fanning eight. Collins was also 3-for-4 at the plate with a home run and three runs batted in. Dane Woolwine worked two innings for the Cardinals, fanning three Mustangs (0-5 in district).

The Cardinals will visit Little Cypress-Mauriceville, which fell to Silsbee 9-2 Friday, on Tuesday while the Mustangs return home to host Lumberton.

ORANGEFIELD – Cooper Longron threw a shutout to lead Orangefield past the Vidor Pirates 10-0 in District 22-4A action at Orangefield Friday night. Bobcats past Vidor 10-0 on Saturday.

The Bobcats wrapped up the first half of 22-4A play with a 5-1 record.
The Bobcats opened up scoring in the first inning, when Kolbie Sowell singled on a 0-1 count, scoring one run.
Orangefield scored four runs in the fourth inning.  The rally was led by a sacrifice fly by Rusten Traxler,  by Brennon Lecoq, and a groundout by Macoy Marze.
A single by Brody Atwood in the second inning was a positive for Vidor.
Longron lasted six innings, allowing three hits and zero runs while striking out six and walking one.
Reagan Hallmark took the loss for Vidor. The hurler went three innings, allowing six runs on four hits and striking out three.
Jason Bodin, Kameryn Henderson, Kyle Michael, Marze, Sowell, and Caleb Fregia each collected one for the Bobcats. The Bobcats was sure-handed and didn’t commit a single error. Michael made the most plays with  eight.

The Bobcats have a bye Tuesday and will host Silsbee next Friday.