Kassidy Wilbur having a blast mowing down opponents for thriving Ladyjacks 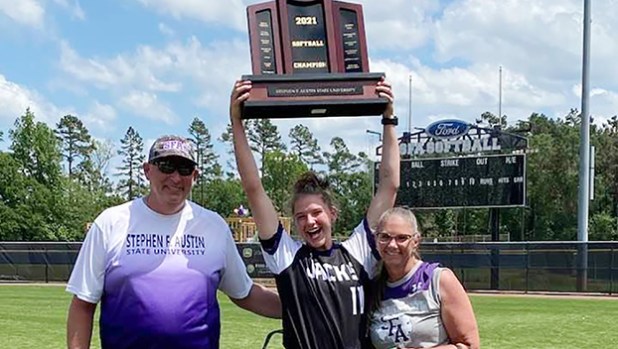 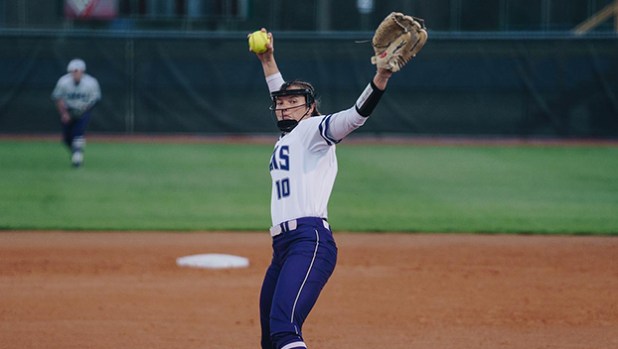 Kassidy Wilbur has been named the WAC Pitcher of the Week the last two weeks. (Photo courtesy SFA Softball)

NACOGDOCHES – There is simply no doubt about it, former Bridge City standout Kassidy Wilbur has been a complete gem for the Stephen F. Austin Lady Jacks on the diamond.

After winning the Southland Conference regular season title last season, Wilbur, a senior, and the Ladyjacks are seeking a Western Athletic Conference crown this season.

She picked up two wins over the weekend in a series against Tarleton State. She won Friday 1-0, striking out nine and allowing just two hits. She came back Saturday to win 7-1 in a 10-strikeout performance.

“We went into this past series thinking this weekend was the one where we need to start stepping up,” said Wilbur. “To beat them three times was special because Tarleton has a lot of talent, especially with all of the transfers they have brought in.”

Last week, Wilbur, the daughter of Denise and Thomas Wilbur, was selected as the WAC Pitcher of the Week for the second time this season.

Wilbur recorded 35 total strikeouts in 23 innings pitched as the Ladyjacks posted three wins in four games. She pitched in all four games with three starts. In the games she started, Wilbur went 3-0 with three complete games while registering a 1.67 ERA.

In back-to-back starts against Louisiana Tech on Tuesday and Lamar on Friday, the senior struck out 12 in each game. In her final start of the week, Wilbur notched a four-hit, eight-strikeout performance in the shutout victory against Lamar.

All of Wilbur’s pitches are starting to find the right spots again this season.

“My rise and drop ball have really been working well,” Wilbur said. “I’m mixing both of those in a little more to go along with my curveball, which is my go-to.”

Now, Wilbur and the Ladyjacks are honed in on winning another conference title as she gets ready to graduate in May.

“The experience here at SFA has been so amazing and I have such great and fun teammates and memories that will last forever,” said Wilbur. “I’m anxious about graduating in May. Funny thing is, I’m going to miss my graduation because it starts at 12:30 p.m. and we have a game at noon that day. It’s all good though, it’s all about the Ladyjacks and I wouldn’t have it any other way.”

Wilbur wants to be a coach after she graduates.

“I love the game so much so I want to be able to continue to be a part of it,” said Wilbur. “I really want to be a college coach.”

Wilbur was on fire all season as a junior last year in leading SFA to the SLC title.

“Last year was so awesome, winning the regular season and getting that SLC Championship trophy,” said Wilbur. “We loved every second of it. Softball is what we love and to have had it taken away from us the previous year due to COVID, we could hardly wait to get back out there and show everyone how good we could be.”

Wilbur posted a 30-4 (1.08 ERA) overall record in the circle last season, a total that established a new single-season program record for wins by a pitcher. She pitched 24 complete games and 16 shutouts (13 solo) while also being recognized as the Southland Conference Pitcher and Player of the Year in the league, the first time a Ladyjack has collected both honors simultaneously.

Being in a new conference is different, but fun.

“We’re still playing Lamar, Sam Houston, Abilene Christian and now Tarleton,” said Wilbur. “They are still some of the same faces. When the conference tournament starts, we’ll see some fresher teams that are in the north in the conference. It’s going to be interesting.”

As a sophomore during a COVID-shortened season, Wilbur recorded 81 strikeouts and a batting average allowed of .174 in her eight starts. She posted a 7-2 record in the circle with five complete game efforts. She tallied three outings of 10+ strikeouts and finished with an ERA of 1.73.

As a freshman she was thrown into the SLC fires immediately and appeared in 40 games and made 30 starts. She finished the season with a record of 20-16 while pitching 229 innings. She struck out 256 batters and held opponents to a .206 batting average, racking up eight games of 10-plus strikeouts.

Though she doesn’t come home a lot, Wilbur still keeps up with what is going on with the local softball season, especially current Bridge City ace Carson Fall, who is putting up great numbers.

“I’m definitely keeping up with Carson, she’s doing really well,” said Wilbur. “She came to a camp up here and I knew then she had a great arm. I wish her and the Lady Cardinals well, they seem to be doing great.”

Wilbur led the Cardinals to four consecutive district championships and four playoff appearances, aiding Bridge City to the fourth round of the playoffs as a junior in 2017. She went 23-5 with a 0.66 ERA as a junior and 22-4 with a 0.89 ERA as a senior inside the circle. She also blasted 22 home runs and claimed 68 RBI over her final two prep seasons, holding a .430 batting average as a senior with 21 extra-base hits.