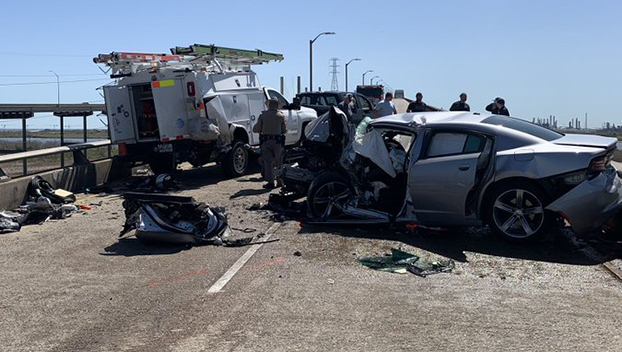 Authorities have released the name of the child killed Friday and mother who was seriously injured during the three-vehicle crash.

Texas authorities identified the driver of the Dodge as 39-year-old Angela Deleon of Orange. Her passenger was 4-year-old Ivey Davis.

The Texas Department of Public Safety is investigating a three-vehicle crash on state Highway 87, on the Rainbow Bridge in the westbound lanes, that took place Friday.

The preliminary investigation indicates at approximately 12:10 p.m., a 2005 Ford pickup was disabled in the left lane.

A 2018 Chevrolet pickup pulled behind the disabled vehicle and turned on its emergency flashers and put cones out, in an attempt to assist with traffic.

It is reported that a 2015 Dodge passenger car failed to control its speed and struck the rear of the Chevrolet, which pushed it into the Ford. After impact, the Dodge skid into the right lane and struck the guard rail.

The driver of the Ford, identified as 40-year-old Christopher Parsley of Port Arthur, was taken to St. Elizabeth Hospital for treatment.

The driver of the Chevrolet, identified as 29-year-old Nicholas Ryman of Beaumont, was taken to St. Elizabeth Hospital for treatment.

The driver of the Dodge, Deleon, was taken to St. Elizabeth Hospital for treatment.

The child passenger was transported to St. Elizabeth Hospital, where she was pronounced deceased.

Justice of the Peace Ben Collins said he was notified of the wreck and has ordered an autopsy on the child.