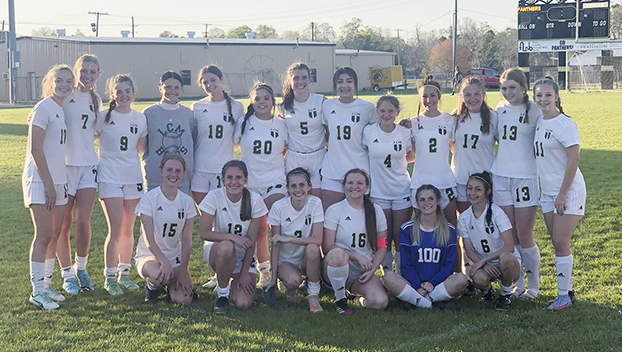 LIBERTY — The Little Cypress-Mauriceville Lady Bears traveled to Liberty Thursday night to take on the Liberty Lady Panthers in the Bi-District round of playoffs and controlled the match with a tremendous defensive effort, winning 4-0.

After dominating the first half, the Lady Bears finally found the back of the net midway through on a quick Annabelle Fisher-to-Taylor Bull combination.

Mariah Ammons turned around just under two minutes later from the first goal and assisted Fisher to tally another one on the board.

Fisher added her second assist on the night from a beautiful cross to Brooklyn Leonard, crashing the goal up the middle of the field to bring the score to 3-0 before half.

Fisher brought the final score to 4-0 with the last goal of the match.

Goalie Matalyn Hill recorded another clean sheet on the night, and the defense held it down so the offense could go to work.

The Lady Bears are Bi-District Champions and will play Bay City or North Forest in the Area Round.

Game information will be released soon.