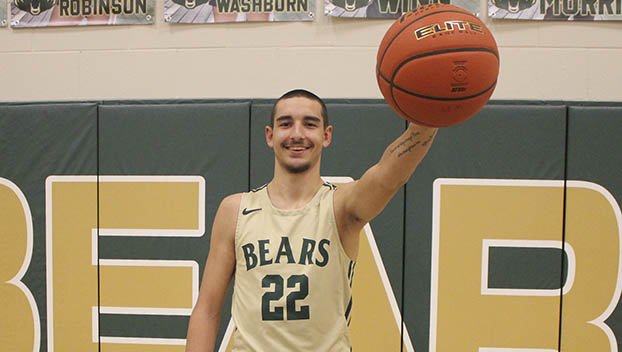 LC-M’s Ben Elliott is the 2022 All-Orange Leader Boys Basketball Team Most Valuable Player for the second year in a row after averaging 22 points and eight rebounds. (Van Wade/Orange Leader)

LITTLE CYPRESS – For Little Cypress-Mauriceville basketball fans, it has been awesome to watch a young player prosper and get better on the court for three years.

And the best thing yet – they get to watch him one more year.

Junior Ben Elliott was a key cog in the Bears’ run in the playoffs as they advanced to the third round for the first time in a long time.

Bear fans have watched him grow from a skinny 6-2 freshman who saw a lot of minutes to a 6-5, wiry junior, who has seen his game grow leaps and bounds. Especially the “leaps,” because he had some great dunks this season.

Elliott was “rocking” with his jump shots all season, leading him to the All-Orange Leader Boys Basketball Team Most Valuable Player for the second straight season.

“We really had an excellent season,” Elliott said. “We started the season a little slow as we were learning to gel together. As we went along, everything came along great and we were playing at our best by the end of the season, which is what you want.”

The Bears finished with a 24-12 record, dominating Huffman in the bidistrict round and Navasota in the area round before falling to a stout Houston Washington squad in the regional quarterfinals. Elliott poured in 64 total points in the three playoff tilts, which is about what he averaged during the season.

For the season, Elliott averaged 22 points and eight rebounds a game. With one year still to go, he has already scored 1,400 career points. He averaged 18 points as a sophomore and 8.2 as a freshman.

“It’s so much different now compared to when I was a freshman, “ said Elliott. “It was awesome to get to play against players older than me. I was so skinny back then and the pace was so much faster but it really helped getting that experience. I grew a few inches and picked up some weight and got stronger and had a good year last year, which gave me confidence. I worked on my game even more after the season last year trying to develop some more and it really has paid off. There is always ways to improve.”

“When he came in as a freshman, we knew Ben had a lot of potential. He was so thin but he had ‘game’ for sure,” said Jeffcoat. “He’s the type of kid that has so much confidence, we saw that even more this year. We are talking about a kid that has played over 100 varsity games.”

Elliott has shown plenty of skills along the baseline and has had his share of nice dunks, but he certainly has something mastered well in his game. What is it?

“I love the mid-range pull-up,” said Elliott. “If I had a signature move, that’s it. I have confidence every time I shoot from that range. It’s something I have always loved to do.”

The Bears were a young team this year and will return their top four scorers next season to hopefully make a deeper run in the postseason.

“We’ve got some key people coming back and we’re counting on Ben a lot to help lead the way in his senior year,” Jeffcoat said. “He’s so consistent and dependable, and other kids feed off that. As a senior, we want him to be even more vocal and he can do that.”

The Bears had some quality wins but the win over Huffman in bidistrict was his favorite. Huffman advanced to the 4A State Finals in 2021.

“We beat them (Huffman) pretty good (59-43) and they had some good guys left from that great team they had,” said Elliott. “The win over Navasota (64-46) in the second round was pretty exciting too.”

Elliott was also proud of a 44-point, 12-rebound performance he had against Aransas Pass in the Aransas Pass Tournament.

“There isn’t a shot Ben Elliott doesn’t like,” laughed Jeffcoat. “But that just shows how much confidence he has with his shots. When he’s rolling, it’s so awesome to watch.”

Elliott, who said his favorite NBA player is Charlotte’s LaMelo Ball, started to love the game at an early age as his Dad Tommy toted him around to play.

“My Dad loves the game and he got me interested early, putting me in Little Dribblers,” Elliott said. “He has always pushed me to be the best I can be and he’s my biggest fan.”

These days, Elliott can still be found in the gym, firing up those mid-range jumpers that melt through the net, but he is also involved in track and is one of the better high jumpers in Orange County.

“Track season is fun and I like the challenge of high jumping,” Elliott said. “But, yeah, I can’t wait to next basketball season. We’re going to be really, really good.”

By the end of next basketball season, there may be 2,000 reasons to enjoy Elliott’s game as he will be chasing the 2,000-point career mark and the all-time LC-M career leader in points scored.