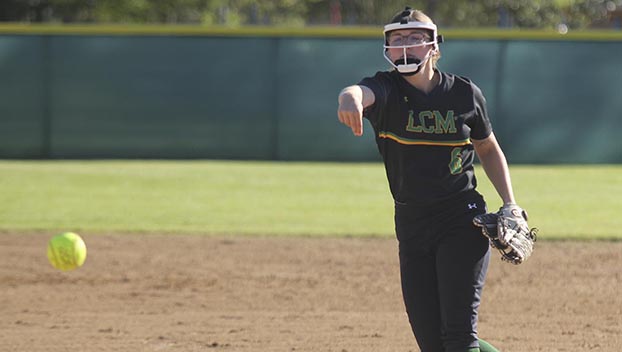 LC-M senior Cami Shugart has stepped in and has been a great team leader for the Lady Bears this season. (Van Wade/Orange Leader)

LITTLE CYPRESS – With such a young crew surrounding the diamond at Lady Bear Softball Field this season, the Little Cypress-Mauriceville Lady Bears have definitely been able to lean on senior pitcher Cami Shugart for guidance and leadership.

Shugart has been such a key cog for the Lady Bears, especially the last three seasons.

Now, the Lady Bears, who sport five freshman, three who play a ton, look for Shugart to keep them going forward.

“It’s been a lot of fun so far this season,” said Shugart. “We have so many new people. We’re a very young team so I try my best to lead by example. I talk to them a lot and try to keep their confidence high. They have so much talent, so I push them to be the best they can be.”

“Cami has really stepped into a leadership role quite nicely,” said Adkins. “She really pushes everyone to rise to the occasion. They watch how she practices and plays the game. She’s a real ‘gamer’ and does everything she can to win. And the rest of the team feeds off that.”

Shugart knows what it is like to accept strong leadership. She had it as well coming up in the Lady Bear program.

The last couple years for me, I looked up to Madeline Stephenson and soaked in everything that she did,” Shugart said. “So, I’m trying my best to fill her role. She meant so much to me and I would love to leave that kind of impression on my teammates now.”

Adkins has certainly enjoyed the progress of Shugart’s game.

“The best thing about Cami is that she has matured so much,” said Adkins. “She’s much more cool and calm this year and doesn’t let things get to her. If she doesn’t like a call from behind the plate, she shakes it off. If someone makes an error behind her, she encourages them that it will be okay. That’s the type of response you want to see from your senior leader.”

Shugart, a First Team All-Orange Leader Team selection last season, was part of an excellent LC-M team last year that advanced to the Class4A Region III quarterfinals after notching a nail-biting 2-1 series win over Hardin-Jefferson in bidistrict and a sweep of Bellville in the area round before falling to a formidable Huffman team.

The bidistrict series win over the Hardin-Jefferson is definitely one of Shugart’s most memorable moments.

“That was such an intense series but we rallied to pull it out after a rough Game One,” said Shugart. “It was so awesome to have that walkoff hit in Game Three to win it.”

Now Shugart is trying her best to lead the charge of the young 2022 Lady Bears as they look to make a push to the playoffs after they have gotten off to a 3-1 District 22-4A start.

Last week she tossed a complete-game four-hitter with eight strikeouts against Lumberton in a 3-2 LC-M win and blanked West Orange-Stark 10-0, allowing just one hit while fanning eight.

“We’ve improved so much since the start of the season and I feel we’re just going to keep getting better,” said Shugart. “We have a great tradition and making the playoffs is what we should always do. We just need to maintain our focus and we can do it. That win at Lumberton gave us a big boost of confidence.”

“Coach Adkins really knows how to push us,” said Shugart. “She makes sure we have our focus and makes sure that we’re ready, whether it is the big things or little things. She really supports us in everything we do.”

Shugart credits her parents Michael and Jill Shugart for sharing the love of the game with her and supporting her all the way ever since she started playing T-Ball at the age of four.

After she wraps up the season for the Lady Bears, Shugart will look to hone her talents at Blinn Junior College.

“I’m really looking forward to playing at the next level and it’s going to be fun,” said Shugart. “Right now, I’m just focused on going out and playing hard and having fun my senior year and rooting on my teammates and see how far we can go.”

Shugart and the Lady Bears will hit then 22-4A diamond again Friday when they visit the Vidor Lady Pirates.