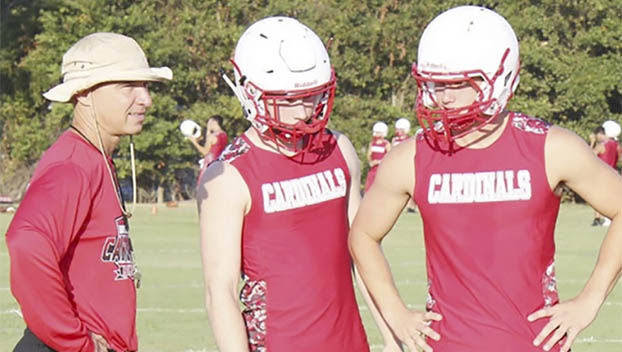 Bridge City native Dwayne DuBois made the announcement that he is retiring from education after having such a successful run as a head coach and also as a long-time assistant. (Van Wade/Orange Leader).

DuBois, a 1986 Bridge City graduate, led the Cardinals to back-to-back playoff appearances in 2015 and 2016. He is in his second stint at Hardin-Jefferson.

“I’m interested to see what is next and what kind of plan God has in store for me,” said DuBois. “The memories I have been a part of will last a lifetime for sure.”

DuBois coached the Cardinals from 2015-2017 after leading Hardin-Jefferson to back-to-back playoff appearances in 2013-2014.

The Cardinals captured the District 10-4A Division I title in 2016 and won two playoff games over Center (35-28) and Bay City (39-19) before falling to Stafford in the 4A Region III semifinals. The playoff win over Center was the Cardinals’ first playoff victory dating back to 2005.

“We had a great run there at Bridge City, especially when we won district in 2016,” said DuBois. “Getting to the third round that year was awesome. The best memory of that season had to come in the Silsbee game, when we went back-and-forth with the Tigers all night and made some big plays at the end to win it. It was a great group of kids to work with. It was a lifelong dream to coach at my alma mater those years and to coach both of my kids in my hometown was really special.”

Prior to going to H-J in 2013, DuBois, who served as offensive coordinator at Vidor for Pirate coach and long-time friend and fellow Bridge City graduate Jeff Mathews. DuBois was part of a Vidor program that went three rounds deep in 2011, the school’s deepest run since 1964.

“There is no doubt, Jeff Mathews is one of my best friends ever,” said DuBois. “He’s one of the best human beings you will ever meet. He is so responsible for putting the Vidor football program on the map after it had been so down after so many years. Those kids would run through a wall for him, and it was so special to be a part of some excellent teams there.”

DuBois was also a long-time assistant at Bridge City in the 1990s.

“That’s when I got my feet wet for sure and I learned a lot from Les Johnson, who was the first head coach I worked for,” said DuBois. “That was a great early staff, many of who were part of the staff when I played there. The respect for guys like Troy Woodall, Dwight Thacker, Richard Briggs, David Guidry and Charlie Miller will always be there. They were all excellent mentors.”

DuBois was also proud to go up against some other super Golden Triangle coaches over the years and has super respect for them.

“I love Dan Hooks, and remember when he was my Sunday School teacher when I was young if you can believe that,” said Dubois. “Cornel Thompson, enough said there, hopefully we can talk soon and he can reveal some of those defensive secrets. Larry Nuemann at Nederland and Matt Burnett at PN-G, there are some coaching legends that have roamed the sidelines around here and it was great to get to know them.”

The Hawks compiled a 19-7 mark in two seasons in Coach Dubois’ first stint there, going 8-5 in 2013 and 11-2 in 2014, advancing to the third round of the postseason each time and then DuBois elected to return to his alma mater in Cardinal Country.

DuBois then made the decision to go back to Sour Lake to coach the Hawks in 2018. Hardin-Jefferson football went 9-30 during that stretch with two playoff appearances. In the 2020 season, the Hawks went 5-5, their best finish since 2016.