Cardinals ‘scrap’ one out against Silsbee in 22-4A showdown 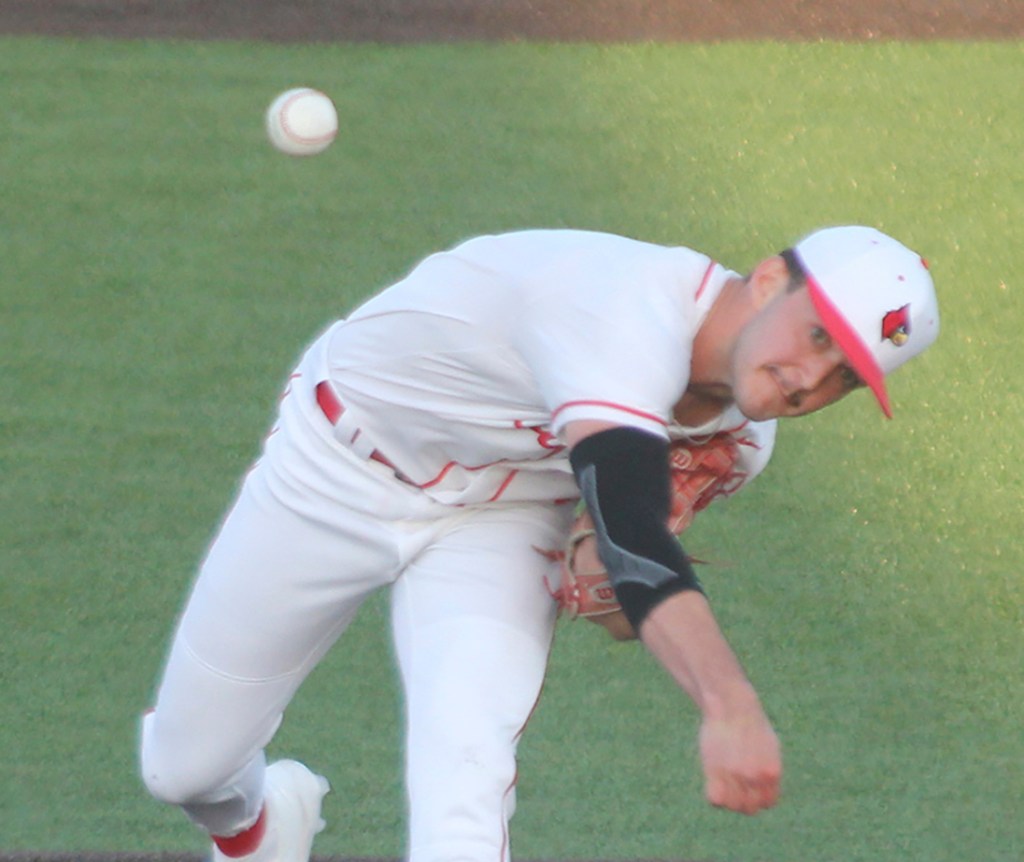 BRIDGE CITY – Even though the District 22-4A season is still in the early stages, call it a scrappy and much-needed win for the Bridge City Cardinals Tuesday night at Chuck Young Field.

In a night of tremendous pitching, the Cardinals were able to scratch in a run in the bottom of the eighth inning to thwart the Silsbee Tigers 4-3.

Deegan King got the rally going for the Cardinals (12-5, 2-1) with a leadoff walk off Tiger reliever Ethan Youngblood to start the bottom of the eighth. King advanced to second on a nice sacrifice bunt by Aidyn Mulhollan. Landon Reeves then drew a walk and John Van Huis was hit by a Youngblood pitch to load the bases.

Brice Swanton finished it when he hit a bouncing chopper between the mound and third base and King was able to fly home to beat out third baseman Van Mitchell’s throw to seal hit.

Reeves got the win on the Cardinal hill in relief as he tossed two innings while striking out two and not allowing a hit. Youngblood absorbed the loss for the Tigers (12-3, 1-1).

The Cardinals got another huge outing from starter Ethan Oceguera. Oceguera worked the first six innings, allowing just four hits while striking out 11 and walking three.

Trailing 3-1 entering the top of the sixth, the Tigers were able to even things up.

Jaden Johnson drew a leadoff walk. Kanon Sundgren reached on a fielder’s choice as Johnson was out at second. Cash Glaze ripped a single between short and third. Simmons flew out to center as Sundgren was able to advance to third. Glaze wound up at second after a wild pitch and Van Mitchell delivered with a two-out RBI single to center to knot the game up.

The Cardinals capitalized on a big Tiger error to score three runs in the bottom of the fourth. J.S. Bearden drew a leadoff walk and Chasse Godwin followed with a bunt single down the third-base line. Justin Abate then put down a bunt and Bearden was forced out at third. With two outs, J.T. Fielder laced a grounder to shortstop Cash Glaze, who had a throwing error to first, allowing Goodwin and Abate to score.

Oceguera followed with a single past third. Van Huis then laced a ground shot that Tiger second baseman Taylor Wise bobbled and then had a misthrow to first as Fielder was able to race in to score, making it 3-1 Cardinals.

The Tigers scratched in the game’s first run in the top of the fourth without getting a hit.

Sundgen got a leadoff walk to start things and he swiped second with one out. Simmons then drew a walk and Sundgren advanced to third on a wild pitch. Sundgren eventually scored when an errant Oceguera throw to third on a pickoff attempt allowed him to come across.

The Cardinals threatened in the bottom of the first. Simmons hit leadoff hitter Van Huis with a pitch. Van Huis advanced to second on a nice sacrifice bunt by Swanton. Braylen Collins then lined a deep shot to right as Tiger rightfielder Evan Welch robbed him of a RBI with a great catch. Van Huis did advance to third on the play. Simmons got out of it by striking out JS Bearden.

In the top of the third, Silsbee’s No. 9 hitter Taylor Wise stroked a one-out stand-up double to centerfield. The Cardinals’ defense answered though. Jadon Johnson struck out as the ball slipped out of Cardinal catcher Abate’s glove. Abate recovered nicely, tagging out Johnson as he was heading to first and then gunning out Wise, who was zipping to third, to complete the double play.

The Cardinals loaded the bases in the bottom of the fifth but Simmons got out of it. Braylen Collins had a leadoff single between second and third. And Goodwin laced a one-out single to shallow leftfield. Abate drew a walk to load the bases. Simmons made it out of it by striking out Deegan King and getting Mulhollan to ground out.

The Cardinals look to continue their winning ways Friday when they visit Beaumont West Brook for a non-district tilt before going back into 22-4A play next Tuesday at Lumberton.