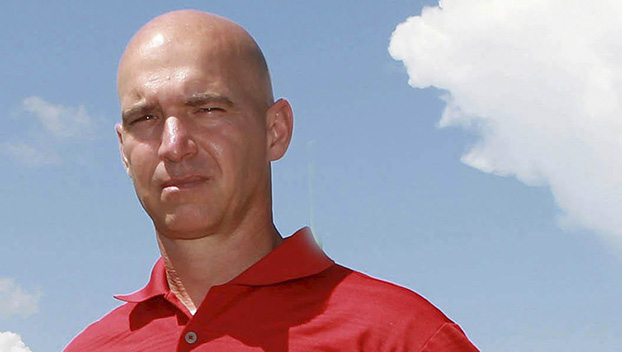 Bridge City native Dwayne DuBois made the announcement that he is retiring from education after having a successful run as a head coach and also as a long-time assistant. (Van Wade/Orange Leader).

DuBois, a 1986 Bridge City graduate, who led the Cardinals to back-to-back playoff appearances in 2015 and 2016, is in his second stint at Hardin-Jefferson.

DuBois coached the Cardinals from 2015-2017 after leading Hardin-Jefferson to back-to-back playoff appearances in 2013-2014.

Prior to going to H-J in 2013, DuBois served as offensive coordinator at Vidor for Pirates coach and long-time friend and fellow Bridge City graduate Jeff Mathews. DuBois was part of a Vidor program that went three rounds deep in 2011, the school’s deepest run since 1964.

DuBois was also a long-time assistant at Bridge City in the 1990s.

The Hawks compiled a 19-7 mark in two seasons, going 8-5 in 2013 and 11-2 in 2014, advancing to the third round of the postseason each time, and then DuBois elected to return to his alma mater in Cardinal Country.

The Cardinals captured the District 10-4A Division I title in 2016 and won two playoff games with wins over Center (35-28) and Bay City (39-19) before falling to Stafford in the 4A Region III semifinals. The playoff win over Center was the Cardinals’ first playoff victory dating back to 2005.

DuBois was able to watch his sons excel at Bridge City as Camden and Caleb played quarterback.

DuBois then made the decision to go back to Sour Lake to coach the Hawks in 2018. Hardin-Jefferson football went 9-30 during that stretch with two playoff appearances. In the 2020 season, the Hawks went 5-5, their best finish since 2016.