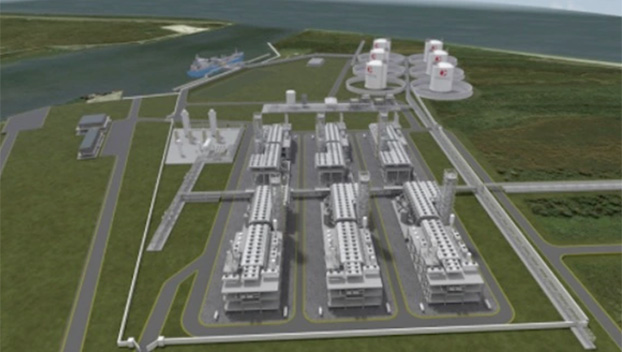 Commonwealth LNG is a LNG liquefaction and export facility located on the west bank of the Calcasieu Ship Channel at the mouth of the Gulf of Mexico near Cameron. The facility will have six 50,000 M3 modular storage tanks and will be able to accommodate vessels up to 216,000 M3. (Courtesy photo)

The Louisiana Department of Environmental Quality public hearing was held in Cameron.

Speakers in opposition noted how the plant would affect air and water quality, produce pollutants that cause extreme weather events, create noise, harm the marsh and wildlife and jeopardize the safe consumption of fish and shellfish.

Ann Roth of Bucket Brigade, who spoke in opposition, said she thought it was telling that “Commonwealth couldn’t make it here to give a presentation,” saying the LNG industry in general, will “kill off Holly Beach.”

“What will it do to our seafood industry,” she said. “This is not for our energy consumption. 70 percent of these contracts are with non-free trade countries.”

Mike Gaspard was there to represent the beach front development committee. He supports the project; however, he asked for Commonwealth LNG to review adding law enforcement because of his expectation of increased traffic and also to help with beach cleanup.

“I’m asking, if they do come to Cameron, Louisiana, and build a plant that they work with the beachfront development committee, ‘’ Gaspard said.

He was allowed to speak for three minutes multiple times. He said the plant will release 19 million pounds of carbon dioxide every day, 365 a year, and the plant’s application failed to cover all the necessary information and one of the boundaries changed on a map between reports. In a previous public meeting about the Commonwealth, he asked for reportable spill material quantities, for instance oil or benzine and the “so-called expert had no idea.” Commonwealth LNG isn’t scheduled to open until the first quarter of 2026.

“This is a permit to pollute,” said James Hiatt of the Bucket Brigade, who said during a presentation later in the meeting that the plant would only provide 35 jobs.

Wilma Subra of New Iberia is with the Louisiana Environmental Action Network.

She said, “the Commonwealth LNG facility is on the west side of the Calcasieu Ship Channel. On the east bank is the Venture Global Calcasieu Pass LNG facility, which is nearly completed. The combined particulate matter will be more than the Prevention of Significant Deterioration (PSD) levels when both facilities are considered together. DEQ should have considered the environmental impact of both facilities at the same time.”

“This project will serve to further imperil the Eastern Black Rail. Louisiana coastal wetlands are critical to our identity and as a waterfowl habitat.”

Some who spoke acknowledged the response of representatives from the LNG industry after the hurricane. They supplied food, water and other necessities. Others blamed LNG emissions for the hurricanes.

“I think it’s unfair to blame the LNG industry for contributing to the recent hurricanes,” said Katie Armentor.

She lives in Cameron, and she is in favor of another LNG plant. Her mother is a South Cameron High School teacher. Her father is a commercial fisherman. She pointed out that many of the speakers in opposition drove great distances to get to the meeting, creating pollution. Their face masks have created pollution, as have hair coloring chemicals.

“That only one landowner showed up in opposition should speak volumes,” she said.

Stephanie Rodrique was another who spoke in favor of the entire LNG industry due to its “economic incentives to all Louisiana employees who benefit directly and indirectly.”

Cameron Parish Assessor Scott Lavergne spoke in favor of the permit, saying it would create millions and millions of dollars of ad valorem taxes for the area.

“I just wanted that to be on record,” he said.

— Originally published by the American Press of Lake Charles, Louisiana.