AND NOW YOU KNOW — September 1940, new stadium debuts in Orange 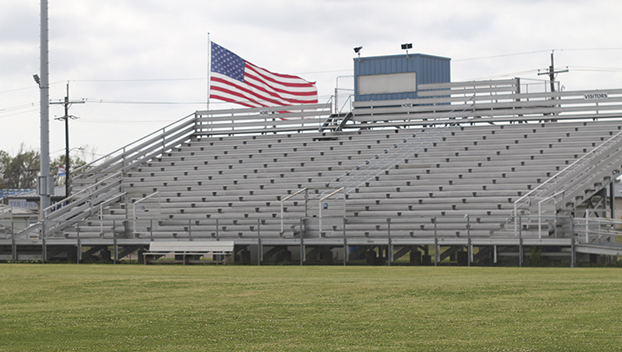 A view of the present day stadium. (Van Wade/The Leader)

The old football stadium on Fifteenth Street sits only occasionally used today, but after its debut in 1940 it was one of the finest in the south. It was also one of the most modern of the time.

Lutcher Stark was noted for his interest in sports. He and his first wife, Nita Hill Stark, had taken an interest in the University of Texas and had bought uniforms for the university band, given them blankets and were responsible for the Longhorn becoming the mascot.

Stark had also hired Dana X. Bible, one of the winningest football coaches in the nation to be the coach of the Longhorn football team. It is said that Stark paid Bible’s first year salary out of his pocket.

Stark decided Orange High School needed a new stadium and was the driving force and a large contributor in getting the new stadium built.

The first home game of the 1940 season was to be played between Orange and Vinton. At the time there was a fierce rivalry between the two schools. The game was scheduled for Sept. 26.

The night before the game a big pep rally was held in Anderson Park. Several truckloads of old boxes had been brought to the park for a huge bonfire. Speakers had been lined up, Congressman Martin Dies was to be the principal speaker.

Other speakers included J.W. Edgar, superintendent of schools; Bill Stark, captain of the football team; and Dexter Shelly, the coach of the Orange Tigers. Frank Hubert was the master of ceremonies.

The Bengal Lancers, the high school band, under the direction of Hubert, provided music for the rally.

The formal opening of the stadium was to take place the next night prior to the game. The scheduled music show was said to be the most spectacular show ever seen in Southeast Texas.

The seating capacity of the new stadium was 5,000, and the game was a sellout. Those attending saw a dazzling array of musical maneuvers, drills and formations by the Bengal Guards, the Orange High School drum and bugle corps.

The Guards wore their new uniforms, costing $8,000, for the first time that night.

The stadium had been built at a cost of $50,000 and was touted as a stadium unexcelled by any other high school in the nation in its modernity, completeness and efficiency.

The new lighting system consisted of eight batteries, each containing 12 lights trained on the center of the gridiron. The lights provided an incredible 144,000 watts. This was between four and five times the lighting as the previous system.

There was also a unique, for the time, electrically controlled scoreboard.

Sportswriters would be seated in a new, modern press box nearly 100 feet long, probably the largest in the south. The press box also contained a private restroom.

A special section had been built in the west section for the Bengal Guards and the Bengal Lancers.

Instead of benches for seating, wide aisles had been built with chairs to provide room for music stands. A special ramp had been built that was wide enough for the Guards and Lancers to march in formation down to the field.

Under the specifications of Stark, the field had been constructed with exceptional drainage and the finest playing turf had been installed.