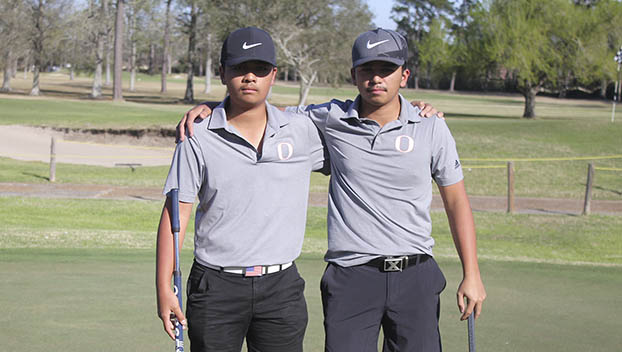 ORANGEFIELD — It can be a great thing – having a sibling rivalry.

It’s even better when you know the two siblings care about each other.

One thing for certain, parents Joey and Stefanie Parks have certainly raised them right, on the golf course and off of it. The brothers credit their parents for being golf lovers and toting them around courses when they were younger, making them quick lovers of the game.

“We poke fun at each other a lot, Lincoln does it to me more, that’s just his personality,” said Xander. “I always get the last laugh when I tell him to go check the scorecard. It’s great to have Lincoln on the team this year. He brings a lot of fun and keeps me calmer with that personality.”

Lincoln is always chasing his older brother on the scorecard, but he’s getting a lot closer this year.

“It’s been a blast, playing with Xander and all of my teammates,” said Lincoln. “I want to push Xander. That helps make him a better player, and he does the same for me. Xander tries to be so perfect with every shot, and I’m kind of the opposite, and just try to let it flow. I try to get him to relax more, and he pushes me to be more focused. We feed off each other.”

One thing for sure, the Parks’ brothers have been feeding on the competition this year.

Xander has won four tournaments and has been second the other two times. Lincoln has been runnerup to Xander on several occasions and has almost been the second or third-place medalist each time out.

Xander, though just a junior, is accustomed to all of the varsity-level competition, while Lincoln is adjusting nicely as a newcomer.

“The competition does get tougher, compared to some of the junior tournaments and in high school, everyone gets stronger, hits the ball further and things like that,” said Xander. “The big key now is to stay mentally prepared and get ready for that next shot, whether it is short range, a long putt or a short putt. That’s what makes the difference as far as being at the top at the end.”

Xander has seen plenty of stout competition, especially as a sophomore, when he battled Little Cypress-Mauriceville Class 4A state champion Jack Burke in several tournaments. He eventually qualified for State, finishing 14th overall. He always felt like he was chasing Jack.

“COVID cut my freshman year short, so everything was kind of new for me still last year,” explained Xander. “I learned a lot, just watching Jack. He’s such a great player and he always inspired me to get better. I know I have been able to win this year, but I was finally able to beat Jack once last year at Homberg and that’s still my favorite moment. He beat me all the time, except that one tournament. To say that you beat one of the best you have ever seen play, I’ll always remember that.” 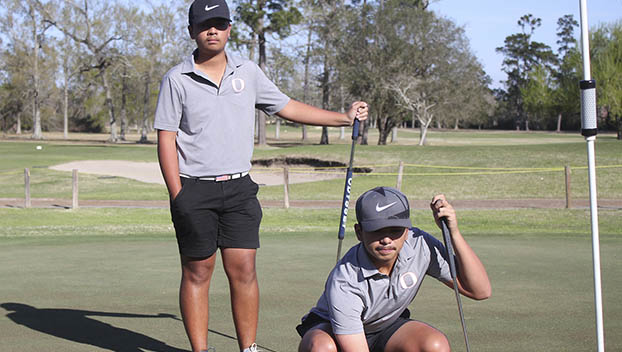 Now, Lincoln is playing “The Chaser.”

“I’m not going to lie, one of my biggest goals is to beat Xander to win a tournament,” said Lincoln. “He’s so good, and I want to be able to have a great round to finally get him. He knows I’m coming, that’s what makes it so fun.”

Xander found it humorous but knows his younger “Bro” has plenty of game.

“Lincoln is always talking smack, I kinda like that, it fires me up more,” Xander said.

“I thought I had Xander beat at Homberg, I was up by two strokes halfway through because he was struggling with his putting,” said Lincoln. “Then I had a few rough holes, got frustrated some and Xander got past me by four strokes. That is definitely a strength for him, when he has a rough hole or two, he bounces right back.”

Orangefield golf coach Todd Trawhon has certainly enjoyed his time with Xander now for the third year but with Lincoln aboard, it is even more special.

“It’s awesome to go out and watch them guys go to work,” Trawhon said. “Their games are so good, they’ve been playing all of their lives. I don’t really have to coach them up as far as their skills are concerned. The best way I feel I can help them is psychologically in certain situations on the course. I try to help calm them down. They are still young in a lot of aspects.”

Trawhon likes what he sees down the road for the Parks brothers and the Bobcats.

“The first goal is to win a district team title and get Xander and Lincoln to grab those top two medals,” said Trawhon. “Then we want to play well enough at Regionals to get the whole team to State. Sure, it would be great to go to State with Xander and Lincoln, but we want the whole team to get there, that’s what it is all about. They both really have great relationships with their teammates and they like to push them and their teammates have fun with that.”

The other Bobcats making an impact on the course are Reese Johnson, Drew Tran, Brayden Burgess and Ethan Gunter.

The Bobcats have won three tournaments and have been second or third in three more.

“I enjoyed going to State last year, but it would be so much better to have my teammates there playing with me,” Xander said. “That’s our goal, if we keep pushing it, we have a really good shot.”