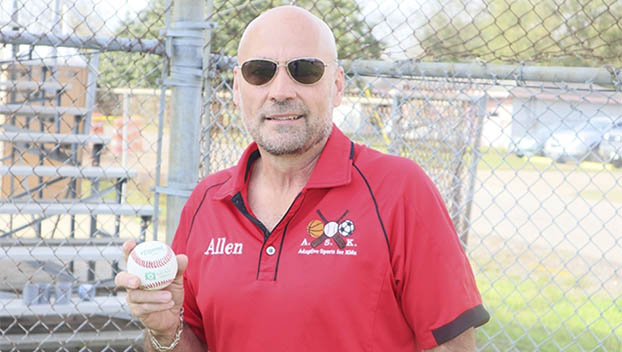 Allen Nation stands on the baseball field on Park Street. (Chris Moore/Special to The Leader)

Approximately 18 years ago, Allen Nation’s daughter was invited to play softball in Bridge City in a Challenger Division, which is similar to Little League softball.

The division was designed to help children with more needs.

Seeing the promise, Nation joined Scott Ferguson and, together, they grew the league to 50 children.

“Nederland Little League invited us over to start their program, so we moved it,” Nation said. “We grew that, still under Little League, to 80-100. We only played like seven games a year. We had parents come to us and ask if they could do more. Ten years ago, myself, Scott Ferguson, Kerri May and Gay Ferguson decided to form a 501-C3 and named it Adaptive Sports for Kids.”

The organization’s first fundraiser was selling paracord bracelets at the art department in the City of Orange.

“We have grown the program,” Nation told Orange Newsmedia last year. “Scott and Gay are no longer board members but they are actively involved. I am the executive director and Kerri is the president. We added many sports.” 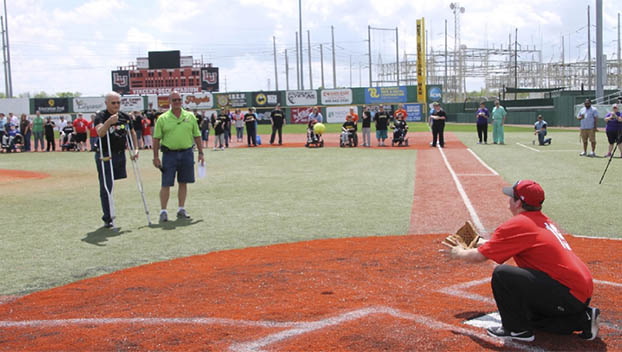 There is a big day on the sporting calendar this month that brings athletes and supporters together for fun competition and better camaraderie.

Adaptive Sports for Kids received 501(c)3 status in 2011 with a goal to give children and adults with special needs the opportunity to play sports at no cost to them.

That effort brings in families from Orange, Port Arthur and beyond.

Allen Nation recently told Nederland City Council members approximately 100 children had gone through Adaptive Sports for Kids registration. The turnout is down from a pre-COVID height but is slowly coming back.

The addition of a lot of new faces is encouraging to organizers.

This season marks the 11th year of the league’s partnership with the City of Nederland, which includes using R L Bob Harmon Park and Doornbos Park.

The league is proud to show off the facility and, more importantly, celebrate the local athletes March 19 with an open-to-the-public celebration.

“Our first game will start about 12:30 p.m., and we will have lots of things out there,” Nation said. “It will be a carnival-like atmosphere. If you have never come out to opening day, it is a very fun day. It’s a long day, but the hours that are put in are with lots of love and caring for these kids.”

There will be fundraising T-shirts for sale.

“We’ve done a lot of work at that park,” Nation said. “With (the city’s) assistance with the parking lot, that place looks amazing. It has gone from a dormant state to coming alive.”

“There is still lots of work to be done, but I think we are on top of that,” Nation said.

Each athlete is partnered with a “buddy” volunteer, allowing parents to sit down, relax and watch their child play sports. If a parent prefers to be a child’s buddy, that is welcome.

“We have a Facebook page, Adaptive Sports for Kids,” Nation said. “’Like that Facebook page, put it in your favorites so you see how we update everything. Whenever you see the announcements about registration open for a particular sport, sign them up and bring them out.”

Organizers recently spoke with a woman from Lufkin who was contemplating driving down select Saturdays to participate. They’ve had children and parents drive in from Galveston, Jasper, Silsbee and China. The program is free of charge and year round.

The fun includes tae kwon do in January, baseball March through May, bowling and soccer in June, basketball in August, a break for September and fall ball from October until the end of the year.

Stephen Hemelt is the publisher of the Orange Leader and orangerleader.com. He can be reached at stephen.hemelt@orangeleader.com or 409-721-2445.