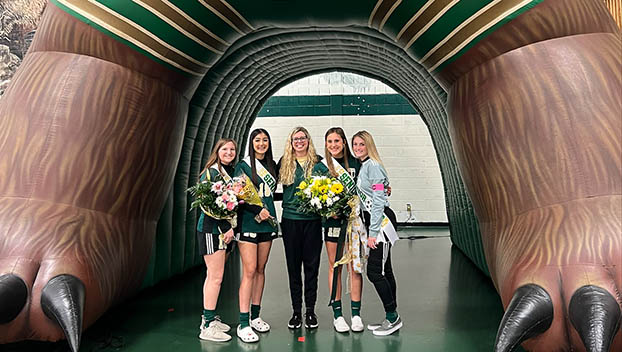 The Bears started the night off with a celebration honoring their seniors. Once the festivities were over, they were off to a quick start on scoring for the night as the Lady Bears cruised to a 8-0 victory.

The offense wasted no time in finding the back of the net and Taylor Bull found the feet of Mariah Ammons to secure the first point on the night.

Bull then got in on the scoring action and took two to the goal back-to-back.

Annabelle Fisher followed suit and put two of her own in the back of the Lady Cardinals’ net.

Before half, Bull found the feet of Fisher and put their sixth goal on the board before half.

Halftime saw a few changes for the Lady Bears as they shuffled the field and moved seniors up to the front line.

Goalkeeper Matalyn Hill played a solid first half in the goal and had a clean sheet, and at the start of the second half wanted in on the scoring.

Kaylee Potter sent a cross from out wide to the middle of the field where Hill never gave up on the scoring opportunity and sent the ball to the back of the net. Potter was then assisted by Fisher for a beautiful shot from distance that landed perfectly in the back of the net, bringing the scoring tally to 8-0.

Makinzi Stevens secured the clean sheet in the second half and contributed to the offense in the first. Defense was held down by Hill, Potter, Loren Rodriguez, Sydney Guidry, Evelyn Mares, Mariah Ammons, Malloy Dollar, Sarah Hormell, Bull, Haelee Fitzhugh and Addyson Dryden.

The offense made up of Bull, Fisher, Hill, Ammons, Stevens, Potter, Rodriguez, Fitzhugh, McKenzie Freeman, Presley Rives, and Allie Stark put constant pressure on the Lady Cardinal defense. The Lady Bears are now 9-2 in district play and 14-6-1 overall on the season. They will travel to Hardin Jefferson on Friday night to take on the Lady Hawks with JV beginning at 5 and Varsity beginning at 7 p.m.

It was a cold and wet night but the Bears showed up with a great team effort and several attacking opportunities.

Goals were scored by Justin Rainey, Nial Patel, Keiffer Reed and David Jordan with an assist each by Dwight Davis and Justin Rainey. Great job by the defense along with goalie Nick Smith once again holding their opponent to a scoreless game.