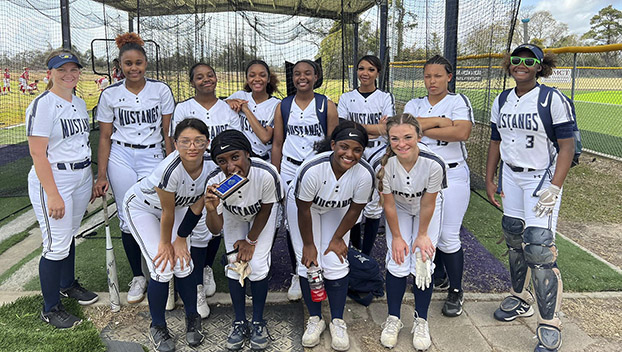 Area softball teams got in a lot of tournament action over the weekend as they prepared for District 22-4A play, which cranks up this week.

Abigail Curphey got the win on the mound pitching 4 shutout innings with 7 strikeouts.

Abigail Curphey gave up 3 earned runs in the loss on 8 hits and 7 strikeouts.

Harleigh Rawls had 2 hits, including a double and a home run. Greenlea Oldham and Alysen Vincent both added hits.

Abigail Curphey gave up no earned runs in the loss giving up 3 hits, no walks and 6 strikeouts.

Joli Ponfick and Harleigh Rawls both had hits.

Curphey got the win on the mound giving up no hits, with 3 walks and 9 strikeouts through 4 innings.

Abigail Curphey got the win on the mound giving up 1 earned run on 5 hits with 5 strikeouts through 4 innings.

Abigail Curphey finished strong in the last game tossing a 2 hit shutout with 6 strikeouts through 4 innings.

The Lady Bobcats finish preseason games and tournament play 12-8 and open district this Tuesday vs. Vidor.

WEST ORANGE – The West Orange-Stark Lady Mustangs went 5-1 to capture third-place at their very own WO-S Spring Classic over the weekend.

The Lady Mustangs have rattled ff seven wins in their last 10 games.

The Lady Mustangs had a great start to the tourney.

In the second game the Lady Mustangs defeated Kelly 7-4. Katie Hogg went 2-for-2 with a triple and had three RBI, Laila Mims laid down a great bunt on a squeeze play to drive in a run. Laila Rhodes went 2-for- 2 with two RBI. Rayven Gales went 1-for-1 and had three stolen base.

The Lady Bears fell to Port Neches-Groves 7-1 in their opener Thursday and bounced back to defeat Lufkin Hudson 8-3. On Friday, the Lady Bears dropped tight decisions, falling to Lufkin Hudson 7-5 and to PN-G 3-0. On Saturday they ended up with a 1-1 tie against the host Lady Cardinals.