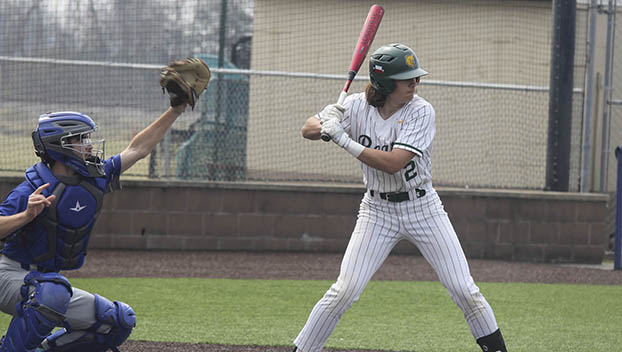 LC-M’s Dean Reynolds had some solid outing at the Certa-Bearden Tournament for the Bears over the weekend. (Van Wade/Orange Leader)

NACOGDOCHES – The Orangefield Bobcats competed in the Nacogdoches tournament this past week, and finished with a record of 3-0-1.

Trent Eaves, Coop Longron, and Brycen Tait picked up wins on the mound, while Kolbie Sowell recorded a save against Bullard. Jason

Bodin led the Bobcats offensively, going 5-for-7 on the weekend with four RBI, including a base-clearing triple against Tatum. Kameryn Henderson and Kyle Michael continued their hot streak, racking up six hits apiece for the tournament. The catching duo of Macoy Marze and Rusten Traxler were lights out behind the plate, allowing zero stolen bases and throwing out two base-stealers for the tournament.

The Bobcats move to 8-0-1 on the season, and will host Evadale on Tuesday before competing in the Silsbee Tournament next Thursday-Saturday.

WEST ORANGE – The Little Cypress-Mauriceville Bears nabbed a couple nice wins at the Certa-Bearden Tournament over the weekend, downing Jasper 4-2 and Beaumont United 15-7.

Against Jasper, Dean Reynolds nailed down the win on the LC-M hill.

Ashton Landry was 2-for-3 at the plate and drove in a run. Blaze Compton went 2-for-4 with a double. Parker Seago was also 2-for-4. Cameron Bilbo was 1-for-3 and drove in a run while Reynolds also added two RBI.

CAMERON – The Bridge City Cardinals improved to 9-0 on the season after nabbing nice wins at the Cameron Yoe Tournament.

The Cardinals defeated Midland Greenwood 11-0. Aidyn Mullhollan had a big game for the Cardinals, nabbing the win on the mound while also driving in three runs.

The Cardinals blasted Columbus 13-4. Braylen Collins netted the win on the mound. He was also 3-for-4 at the plate and drove in three runs. Deegan King and Brice Swanton drove in two runs apiece.

Bridge City also notched a 4-3 victory over West. Dane Woolwine worked four innings, allowing just one hit while striking out six. J.S. Bearden was 2-for-3 and drove in two of the Cardinal runs.