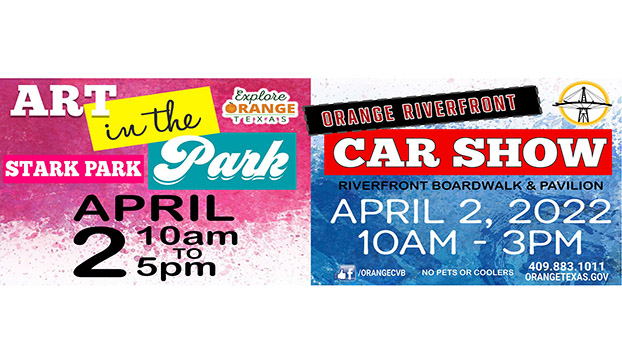 The Orange Convention and Visitor’s Bureau is hosting the 20th annual Art in the Park and 3rd annual Orange Riverfront Car Show April 2.

Art in the Park will be held April 2 beginning at 10 a.m. at Stark Park until 5 p.m., and the Orange Riverfront Car Show will be held at Riverfront Boardwalk and Pavilion from 10 a.m. to 3 p.m.

According to a release, the events are within walking distance of each other to provide entertainment for all ages and interests.

“This is our third year we are combining Art in the Park with our car show that is held at the Riverfront Pavilion,” said Brandy Judice, City of Orange Convention and Visitor’s Bureau Coordinator. “We’ll actually connect the events together so when people come out, they can walk between both events.”

Judice said the Convention and Visitor’s Bureau is planning on having the art and craft vendors along Seventh Street and down Front Avenue so that the Art in the Park event can mix with the car show that will start at the Riverfront pavilion and end on the other side of Front Avenue.

Judice also expects a great turnout based on the engagement in the past.

“We’ve always had a really good turnout with it,” she said. “We had a great turnout last year and the year before because we added the car show with it. People are wanting to get out of the house now and do stuff. If the weather’s nice, it should be a huge turnout.”

The art show features items from more than 100 artists and crafters and also includes live music.

The car show will host classic cars, show cars and sports cars and will also feature a DJ.

Food and drink vendors will be present at both events, and dogs, skateboards, bicycles and coolers are prohibited.

Registration for Art in the Park takes place on a first come, first served basis by turning in a completed registration form, located at orangetexas.gov/157/Convention-Visitors-Bureau, to the Convention and Visitor’s Bureau office.

Pre-registration applications for the car show may be completed online until March 25.

On-site registration for the car show will be available the morning of the event beginning at 8 a.m.

— By Tim Cohrs; reach him at tim.cohrs@orangeleader.com