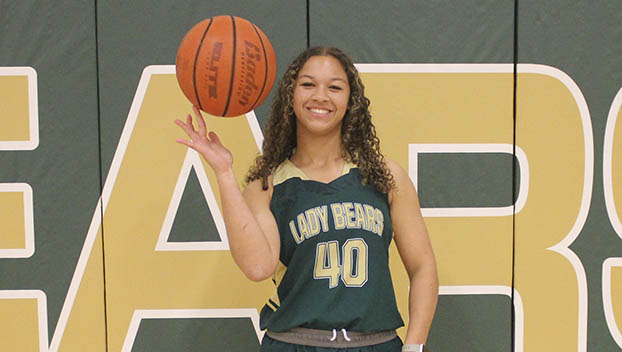 LITTLE CYPRESS – A certain Little Cypress-Mauriceville Lady Bears freshman didn’t get initiated by opponents in her first year on the varsity basketball team.

As a matter of fact, she did most of the initiating.

There is no question about it, LC-M’s Keylie Washburn did it all for the Lady Bears as they enjoyed a banner season.

Washburn proved to be a “Jill-of-all-trades,” by being able to play every position on the court at one time or another.

Washburn was a huge reason why the Lady Bears soared to their best record in nearly two decades.

Washburn was the key cog in the Lady Bears going 26-9 on the season for Coach Eddie Michalko. She pumped in more than 18 points a game, snagged more than nine rebounds a contest and swiped nearly four steals a game.

With her exploits, Washburn has been named the 2022 All-Orange Leader Girls Basketball Team Most Valuable Player.

“Wow, this is a great feeling and feel really honored,” said Washburn. “There is no way in the world I could have had the season I had without my wonderful teammates and coaches. It’s been a blast, and hopefully we’ll just keep on getting even better.”

Washburn felt like the team accepted her right off the bat.

“My older teammates welcomed me with open arms from the very first day of school and had my back,” Washburn said. “I thought I could make the varsity but didn’t know if I was going to be able to be a starter. But, my coaches believed in me and the team had faith in me and it kind of took off from there.”

Her teammates very seldom pick on her, but she doesn’t mind when they do.

One thing for sure, opposing teams knew what Washburn meant to the Lady Bears as she tormented them on the offensive and defensive ends.

“I always want to be a well-rounded player. That was my goal in every game I play in, because I love to win,” said Washburn. “There isn’t one move or shot I favor over another. If I had one, it would be my pump-fake, because I love getting people up in the air and going by them or getting a foul called on them.”

The Lady Bears were 16-8 but started District 22-4A play 1-3. They took off after that, winning eight straight district games and two playoff tilts before seeing there 10-game winning streak come to an end against Huffman in the 4A Region III Regional Quarterfinals.

The Lady Bears were able to utilize Buna transfers in sisters Asia, Aniyah and Amanni Robinson when the new semester started in January.

The Lady Bears got on a hot streak and defeated every 22-4A team in the second half of district play.

Washburn has a pair of memorable games that stand out for her during the magical run, including the 75-64 win over 22-4A champion Silsbee and the nail-biting win over Houston Washington in the area round of the playoffs.

“The Silsbee game was so big because they came in here without a loss in district and we really played our best game of the year in that one,” said Washburn. “Then the Washington game, that was crazy. We got on top of them and they made a great comeback at us and we were able to hold them off.”

“I started with Little Dribblers when I was about 8 and I’ve had a chance to play some AAU ball,” Washburn said. “I have a great support system. My parents have hauled me around a lot over the years.”

Now Washburn is honing in on another sports she loves – Softball.

Washburn, who plays third base, had a game-winning hit at the Sweeny Tournament last weekend after coming fresh off the basketball court.

“I’m exciting about softball too, been playing that even longer, since I was 4, I’m looking forward to us having a great season there too.”

She remains pumped about next basketball season too.

“We’ve got seven varsity players back and we are thrilled about that,” she said.