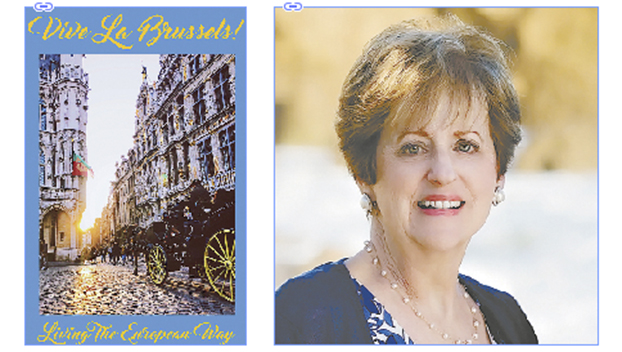 Carrie Joiner Woliver, as one of the founders of the Friends of the Orange Depot, is proud of the restoration of the historical gem that benefits the people of Orange and beyond.

“It took us more than five years to fund the project, but with the passionate volunteers, committed architect (Rob Clark) and contractor (JackBuilt) and the support of the Stark Foundation, we accomplished our goal,” Woliver said. “Now as we continue to work on improving the building and planning exhibits, we are so pleased that the people of Orange really enjoy holding their special events at the Depot. Those rentals provide the necessary funds for the maintenance of this 110-year-old depot.”

One of the next special events planned for the location is near and dear to Woliver.

Friends of the Orange Depot and the Orange Community Players are hosting a book signing from 2 to 4 p.m. March 20 at the Depot, 1210 Green Avenue, for Woliver’s new book, “Vive la Brussels! – Living the European Way.”

Local literary fans are already familiar with her previous work, “The Train Stopped in Orange.”

Diana Hill, vice president of the Friends of the Orange Depot, asked Woliver if she would be interested in having a book signing in Orange.

“Not only is the organization sponsoring the event, but also the Orange Community Players who always support our events,” Woliver said. “Two members of OCP serve on our board, Codie Vasquez and Paul Burch. At the book signing, I will also have some copies of “The Train Stopped in Orange,” for those who have not read it.

“I am hoping that a lot of my readers of “The Train Stopped in Orange” come to the event. This book is another memoir, but of our adventures living in Europe as a young couple set in the 70s.”

Woliver said she and husband Ron love to resurrect their memories from the more than five years they lived in Brussels and will talk about them with anyone who will listen.

During the isolation period of the pandemic she saw a window of time to write down their story for the enjoyment and for her grandchildren.

“We hope it will inspire them to consider living or just traveling overseas as it is such a broadening experience,” she said.

During the book signing, for $10 attendees receive a signed copy of the book, and proceeds will be donated to the Orange Train Depot. Refreshments will be provided, and guests are encouraged to take time to meet and greet in the venue.

The depot is available for special events for modest fees, which go towards maintenance. Plans for future exhibits and improvements to the museum grounds are ongoing.

Woliver joked she has no plans now to write another book, “but if I do in the future, it will probably be about how we saved a depot for Orange.”

— By Stephen Hemelt of The Orange Leader