Kassidy Wilbur picks up where she left off, mowing down batters, no-hits Purdue 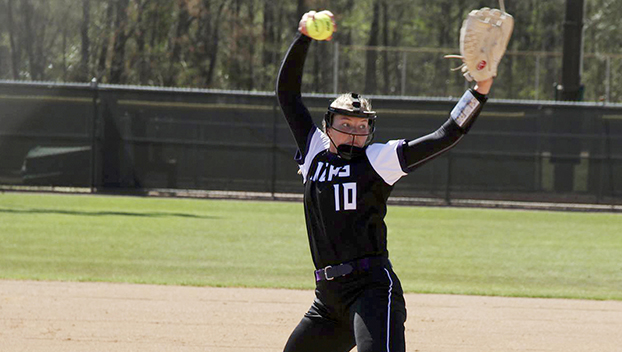 BATON ROUGE – Big 10 softball power Purdue found out the hard way when it comes to facing Kassidy Wilbur when she is on fire.

Wilbur, a Bridge City grad and senior at Stephen F. Austin University, mowed down the Boilermakers in a complete-game no-hitter as the Lady Jacks nailed down a 2-0 victory at the Purple & Gold Challenge Tournament hosted by Louisiana State University over the weekend.

Wilbur a senior at SFA, was dealing, striking out 12 Purdue batters.

Before the season got underway, Wilbur was selected as the Western Athletic Conference Preseason Pitcher of the Year.

Wilbur posted a 30-4 (1.08 ERA) overall record in the circle last season, a total that established a new single-season program record for wins by a pitcher 1.08 ERA. She pitched 24 complete games and 16 shutouts (13 solo) while also being recognized as the Southland Conference Pitcher and Player of the Year in the league, the first time a Ladyjack has collected both honors simultaneously.
“Wilbur is one of the top pitchers in the country and has been for the last three years,” said Head Coach Nicole Dickson. “She is physically stronger this season with a fearless competitive edge in the circle.”

Wilbur has had a great run at SFA.

As a sophomore during a COVID-shortened season Wilbur recorded 81 strikeouts and a batting average allowed of .174 in her eight starts. She posted a 7-2 record in the circle with five complete game efforts. She tallied three outings of 10+ strikeouts and finished with an ERA of 1.73.

As a freshman she was thrown into the SLC fires immediately and appeared in 40 games and made 30 starts. She finished the season with a record of 20-16 while pitching 229 innings. She struck out 256 batters and held opponents to a .206 batting average, racking up eight games of 10+ strikeouts.

Wilbur led the Cardinals to four consecutive district championships and four playoff appearances, aiding Bridge City to the fourth round of the playoffs as a junior in 2017. She went went 23-5 with a 0.66 ERA as a junior and 22-4 with a 0.89 ERA as a senior inside the circle. She also blasted 22 home runs and claimed 68 Runs batted in over her final two prep seasons, holding a .430 batting average as a senior with 21 extra-base hits.

The SFA Lady Jacks are also the preseason favorite to win the WAC Conference this season.