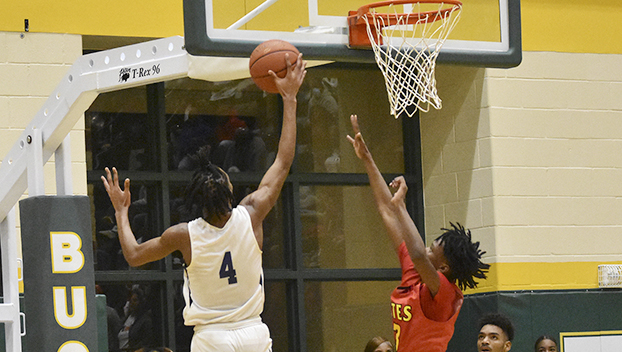 Houston-Yates came out scorching-hot, opening the first quarter with a 16-2 run in the first three minutes. West Orange-Stark looked overwhelmed to begin but regained its composure to keep things from getting out of hand.

The Mustangs pulled closer, bringing the game within six points, 16-10. In the final two minutes of the first quarter, the Lions scored seven unanswered to cushion their lead, sitting ahead 23-10.

West Orange-Stark held a narrow three-point lead at halftime, 39-36. The Mustangs’ leading scorers at the half were Papillion with 16 points, followed by Darren Anderson and Michael Wardlow with 10 each.

The ‘Stangs kept their underdog hopes alive in the third frame, going bucket-for-bucket with the Lions. The West Orange-Stark offense slowed down, but scored 14 points to Houston-Yates’ 15 in the third quarter. At the end of three, the Mustangs remained ahead, 53-51.

The Lions kept it close in the fourth, pulling even with the Mustangs several times across the final eight minutes. With 2:30 left in the game, Deshon Scott nailed a three-pointer to bring Houston-Yates within one point, 69-68. Scott stole the ball on the next possession before converting a layup to put the Lions ahead, 70-69.

The Mustangs retook the lead with 1:30 to go on a driving layup by Wardlow. However, Scott would drain a contested midrange shot with one minute left, keeping the Lions in the game.

A costly foul by West Orange-Stark resulted in free throws for the Lions with 40 seconds left, allowing Houston-Yates to go up by four points; enough cushion to come out with a win.

The Mustangs did all they could to fight back against the Lions, but ultimately fell short, losing 75-71 in a heartbreaking finish.

Papillion paced the Mustangs in scoring with 22 points, eight rebounds and five blocks. Teammates Holifield and Wardlow tied for second on the team with 13 points apiece.

— Written by KEAGAN SMITH for The ORANGE LEADER