Bears silence the “rattle” and venom of Navasota in area round 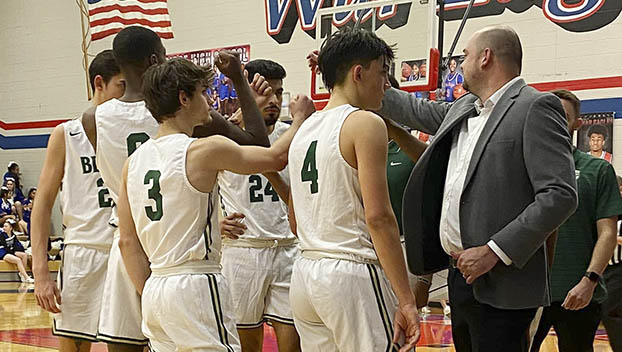 LC-M coach Brad Jeffcoat gets the Bears motivated during a timeout against Navasota Friday night at Oak Ridge High School.

The Bears (24-11) were paced by Ben Elliott and Da’Marion Morris, who fired in 20 points apiece. Alantheon Winn contributed 17 to the attack.

“We felt like we gained control early, especially in the second quarter,” said LC-M coach Brad Jeffcoat. “We played really well and kept the pressure up. It was another good defensive effort.”

The Bears were coming off a 59-43 bidistrict win over Huffman in which the defense rose up and is peaking at the right time.

LC-M will move on to face Houston Washington Tuesday in the Regional Quarterfinals at Lee College in Baytown with the start time being either 7 p.m. or 7:45 p.m.

The Bears offense got hotter in the second quarter and the defense stiffened as they went on a 17-9 spurt to take a 32-21 edge by halftime.

The Bears kept the Rattlers at bay in the fourth quarter as they closed out the game by outscoring Navasota 18-17 in the final eight minutes.