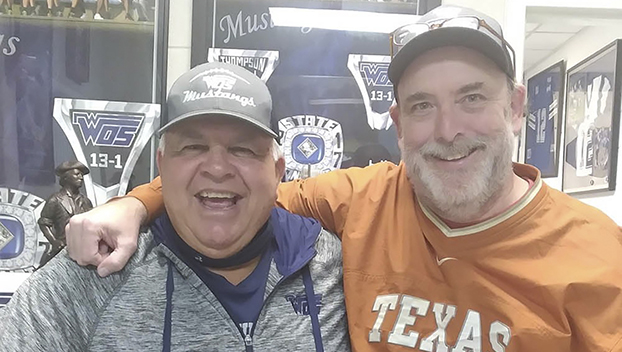 It was a heartwarming day for me as the West Orange Cove Consolidated Independent School District honored long-time coach Cornel Thompson by dedicating the Strength and Conditioning Center in his name Saturday.

What a joy it has been for me covering the Mustangs and him over all of these years.

A lot of people know, and a lot don’t, but I consider Cornel part of my “family.”

Yes, this Little Cypress-Mauriceville graduate grew up right across the street from Cornel all of those years he lived on Huntsman Drive in Bear Country.

I have known him since I was 5. He probably can’t remember or count all of the times that a little cotton-haired kid from across the street bugged him, talking about sports all the time and yet he always had time to listen to me, even though he coined me as “The cotton-headed Little Cypress Punk.”

That’s alright Bears fans, that brave little kid always got him back, calling him “The Blue and Silver Punk.” Think about it, how many kids would get away with that!

I was always there with him on his journey, whether I was a 6-year-old blonde-headed sports nut or a balding 55-year old middle-aged sportswriter. During almost 50 years I was there for all of the big wins and all of the tough losses.

I enjoyed those days when I got to see him coach the Stark High baseball team and would take that “long ride” with Vickie Thompson Johnson to watch the Tigers play at Bridge City and Vickie always took me to Burger Town. Doesn’t sound like much, but to a 6-year old, it was like a mini-vacation.

I remember helping my Mom change his kids’ Marcus Thompson and Michael Thompson’s diapers and to see them two grow as amazing human beings and fathers as well, warms my heart. Ditto for his stepson Chad and step daughter Nikki, who are both wonderful parents.

I remember when he used to lift weights in his backyard, and he would pretend like I was “spotting” him at 8 years-old and 70 pounds soaking wet.

He would always pick on me about how much time I spent dribbling a basketball or shooting in the backyard. All of these years later I still come back at him, telling him I will always be 1-0 against WO-S after I scored 27 points at Mustang Gym that night in 1984.

My Mom would always pick on me on why I never set my alarm clock. I never had too, Cornel would crank up “Old Blue” (his 1968 Chevrolet) and let it warm up for what seemed to be 30 minutes every morning.

I remember when Cornel moved into our neighborhood, my Mom and Dad just loved him to pieces. In fact, Mom would always say how much of a fine-looking young man Cornel Thompson was and then I would always tell her, “Mom, you need to go get an eye exam.”

The dedication ceremony was awesome, but his retirement party at the VFW capped off a tremendous day of celebration.

The speeches Saturday night from former coaches and players brought back so many tremendous times, just wish I had enough space to mention everyone’s speeches.

Perhaps the coolest thing about Saturday night was watching Cornel two-step around the dance floor in his all-black ensemble of a Western shirt, pants and boots. My wife Laura was amazed he wasn’t in blue, that’s all she has ever seen him in. For all Mustangs fans that think Cornel doesn’t wear anything but WO-S sweatshirts, sweat pants and wind breakers, all of you are wrong. He’s only in them 99 percent of the time.

The memories just go on and on.

It was more than just Mustangs Football. It’s about all of those talks we had sitting together at baseball games, basketball games and track meets.

Frances Thompson, what a gem right there.

Thanks for being by his side for 33 years-plus. I know, he is a lot to handle, but he’s blessed to have you. I tried to twist his arm to retire ever since the 2017 season, but now he’s all yours Frances, and don’t forget about my Gumbo.

When is the Gumbo Party?

Love all of the Thompsons. God Bless you all!

Van Wade is the sports editor at The Orange Leader. He can be reached at van.wade@oramgeleader.com.