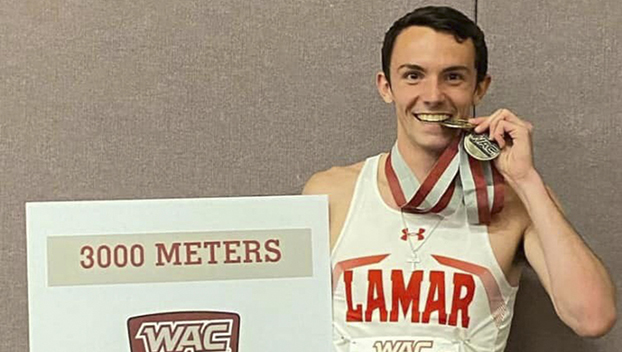 ALBUQUERQUE, N.M. – After a successful start on their first day at the Western Athletic Conference Indoor Championships, Lamar’s track and field teams would add another conference champion along with more top finishes on the second day and former Little Cypress-Mauriceville standout Eli Peveto continued his hot streak by winning the 3,000 meters Saturday.

Peveto, who won the 3,000 meters at the Howie Ryan Invitational about 10 days ago, improved on that time by nearly three seconds.

Peveto has shined at Lamar after a great run at LC-M.

Peveto qualified for State and State Cross Country all four years as a Bear and was The Orange Leader’s Track Athlete of the Year from 2017-19.

He has had a superb run for Lamar as his times have continued to improve drastically over the last two seasons and he played a big role in helping the Cardinals claim the 2019 Southland Conference Men’s Cross Country Championship.

The Cardinals posted other success at the indoor meet.

Lamar had several other nice finishes at the WAC Championships.

Aranjanee Jackson took fourth place in the triple jump (12.09m). DeClan Neary claimed fourth in the one-mile timing in at 4:15.39. Jaylon Roberts and Chloe Rodriguez both had fifth place finishes in the 400m. Roberts timed in at 47.88 while Rodriguez posted 55.81 seconds. The men’s 1600m relay team finished fourth with a time of 3:15.69 seconds.

Collectively, the men’s team finished fourth overall with 77 points while the women’s team were seventh overall with 36 points. Up next are the NCAA Indoor Championships, which will start on March 11th in Birmingham, Ala.