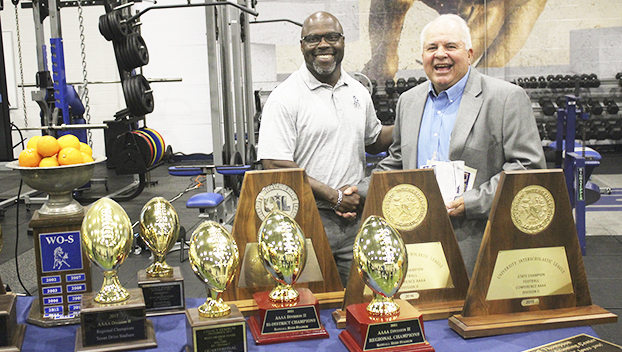 WEST ORANGE – There were some tears shed and a ton of smiles, as well, across the board. One thing for sure Saturday at West Orange-Stark High School, the event was special and it was for a “special” individual. And of course, they did it “The Mustang Way.”

The West Orange Cove Consolidated Independent School District honored long-time coach Cornel Thompson by dedicating the Strength and Conditioning Center in his honor in front of family, friends, coaches, former coaches and so many amazing players who were fortunate enough to be part of his 46 years with the school district.

“It’s such a great pleasure to honor such a wonderful man and it was a no-brainer for the School Board to do this for a man that has been the heart and soul of the most winningest program in the state’s history by winning percentage,” said WO-S Superintendent Dr. Rickie Harris.

“It’s been a blessing to have been able to work by Coach Thompson’s side. He’s a man with great integrity, and he’s a man that always stands up for what’s right. There is nothing fake about him. He is so real. When you think of the Mustangs, you think of Coach Thompson.”

The man known in Orange County, Southeast Texas and across the state as simply “Coach T” was thrilled and emotional in receiving the honor.

“I have been blessed to have been able to coach some of the finest kids and be involved with some of the best coaching staffs ever assembled,” said Thompson.

“Like I have said before, we’ve had some tremendous talent walk through this fieldhouse. Most of them bought into the system we started here with Coach (Steve) McCarthy and Dan Ray (Hooks). The kids bought into our offseason, bought in on how we practice. We always made a point to them that nobody else was going to outwork the Mustangs.” 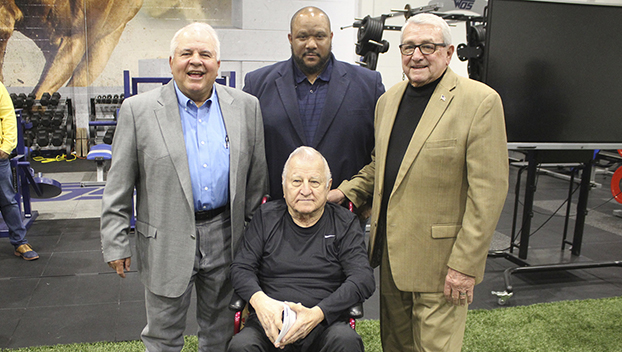 Long-time Mustangs assistant coach Terry Joe Ramsey had plenty of reflection that he spoke to the crowd about.

“How fitting it is to name this facility after him because this is where you would find him every day, pushing our kids to the limit, making them stronger, helping them get faster, helping them become more mentally prepared, not only on the field of play but in life as well,” said Ramsey.

“His love and passion for the Mustang traditions is second to none. And it all starts right here in this room, this large building where a lot of sweat and grit took place has turned young boys into men. What a pleasure and ride it has been working for him.”

Thompson was proud to talk about the history of the program, and he was there from the very beginning as an assistant when the two schools merged in 1977.

“What a lot of people don’t know or realize is that we have recorded 120 shutouts. Let that sink in, we’ve had 17 more shutouts in our history than total losses. You would think that was ‘fantasy land talk,’ but it’s the God’s honest truth. It’s truly, truly amazing.”

After 51 years in the coaching profession, Thompson turned in his resignation in mid-December, but his legend will always remain on campus.

Other than a couple years in Kirbyville, one in Palestine and two in Huntsville, Thompson spent the other 46 years turning kids into men at WO-S.

He logged 35 of those years as a stout linebackers coach and defensive coordinator before he took over the head post in 2011. He also spent time, with nice success, as the head baseball coach at Stark High and at WO-S.

The 2016 state champions will arguably go down as one of the best squads in the state’s history when they went 16-0 and outscored opponents 811-69.

The Mustangs advanced to the 4A Region III Finals 10 out of Thompson’s 11 years at the helm.

Under Thompson’s guidance, the Mustangs went a perfect 53-0 in district play, which would be tough to duplicate anywhere. In those 53 wins, they outscored the opposition 2,161 (40.8 points a game) to 392 (7.4 points a game). The Mustangs accumulated 18 shutouts and held district opponents to seven points or less in 15 other games.

“Wow, I really didn’t realize those numbers,” said Thompson. “That’s a credit to a great bunch of kids and a great coaching staff. I don’t deserve all that credit, it’s a tribute to the kids’ and the coaching staffs’ work ethic and commitment to the program.”

“No question, we’ve had a great run since the two schools merged back in 1977 and the people, coaches, teachers and kids I’ve been fortunate enough to be able to come across will always have a special place in my heart,” said Thompson.

“There are so many people to thank, but that list would just go on forever. Coaching is not a job that’s as easy as most people think. I’ve been blessed to have done it for 51 years. Not many people can say that, what a great ride it was for sure.”

Thompson plans on keeping up with the Mustangs and their future successes.

“Coach T is always going to be keeping up with the Mustangs, that’s just the Mustang Way, once a Mustang, always a Mustang,” said Thompson. “I knew it was time for me to move on and enjoy the rest of my life. Frances and I have been married 33 years and I’m so ready to be with her all of the time now. She has been a trooper, a warrior and right there by my side. She’s my prettiest assistant. She’s watched so much film over the years, and I’ve drug her to so many clinics all over the country. It’s time for me to devote my entire energy to her and my family.”