REVIEW: The tragedy of “Macbeth” is a riveting drama 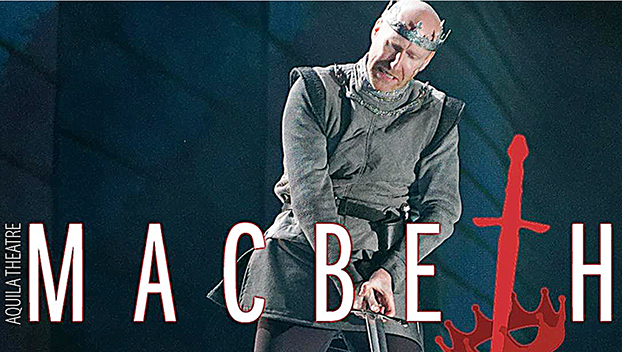 A simple stage, a few props and fluid costume and set changes were the only things needed for the audience to watch William Shakespeare’s Scottish tragedy “Macbeth,” become cursed by witches, murder for power and drove insane by ghosts.

The show, presented by an England based theatre company, Aquila Theatre, performed at the Lutcher Theater for the performing arts on Feb. 17.

A powerful commentary on unchecked ambition and power, Macbeth, is read by millions each year and offers timeless lessons about motivation and human nature. This is a world where “fair is foul, and foul is fair.”

On a deserted moor shrouded in mist, a warrior returning from the battlefield is met by three old women who deliver a chilling prophecy – that one day he will be crowned King of all Scotland. So, begins one of Shakespeare’s most exciting plays, The Tragedy of Macbeth – a thrilling tale of ruthless ambition, deadly deceptions, intense paranoia and ultimately, insanity.

After Macbeth, played by James Lavender, receives the prophecy, he is given a new title by a grateful King Duncan. This sends Macbeth and his wife Lady Macbeth, played by Aamira Challenger, into a frenzied lust for power that results in the brutal murder of the King. As the Macbeths try to consolidate their power, they are besieged by paranoid visions, terrifying phantoms and the unraveling of their minds.

Challenger’s Lady Macbeth is the driving force behind Macbeth’s ambitious desires to become King. She portrayed the strong, cold and vindictive woman who is determined to see her husband set aside his kindness toward others to fulfill their ambitions to become the next rulers. Challenger was effortless in her delivery and awed me with her portrayal.

Lavender embodies Macbeth’s character in every way, which makes it clear why he was cast in this role. He owned the stage during a banquet scene when Macbeth is haunted by the ghost of Banquo, played by Conner Keef, sitting at his place at the table. This is the first scene that Lavender portrays Macbeth’s insanity as he screams, throws himself across the banquet table and then left in the fetal position on the floor.

This week’s performance drew a well-deserved standing ovation from an audience of wide-ranging ages, demonstrating the themes that occupies Shakespeare’s plays – ambition, guilt, sin and retribution, are never too late to learn.

— Written by Sierra Kondos, Special to The Leader