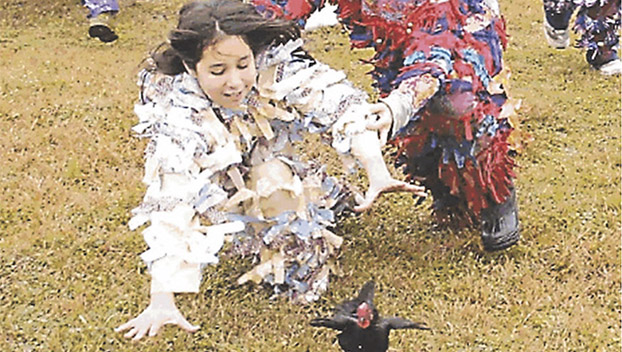 An eager crowd of youngsters tries to catch a chicken during an Elton Mardi Gras Run. (Doris Maricle/American Press Archives)

Keeping storied traditions alive is a part of what makes the rural Mardi Gras celebrations throughout the Cajun prairie so special.

There is a rich heritage of song, dance and antics that unfolds annually in rural countrysides from Elton to Tee-Mamou and points in between.

Rather than following their Crescent City revelers with grand themed parades and parties, costumed revelers jaunt through the countryside dancing, singing and chasing chickens in open fields in exchange for ingredients for a big pot of gumbo.

Rooted in French medieval history, the Courir de Mardi Gras (Mardi Gras Run), as it is known, has been part of Mardi Gras in Cajun and prairie country of Louisiana since the 19th century.

Today, many of the runs follow the same traditions and route as their Cajun ancestors did centuries ago, often beginning at sunrise and ending late afternoon with a fais do-do (dance) and gumbo.

The main event is the chicken run led by the capitaine with costumed and masked participants on horseback, on foot or in trailers slowly making their way through the countryside. Their destinations are dozens of backroad meeting places – a barn here, home there, hunting camp in one community and a local business in another.

At each stop the captain asks permission from the homeowner for the Mardi Gras to visit. Once permission is granted, the captain waves his flag and the riders dismount and crawl towards the house on hands and knees, whooping loudly. They dance and sing in exchange for a live chicken, rice, other ingredients for their gumbo or money. Before leaving they invite their hosts to come share in their gumbo that evening.

Elton rice farmer David Bertrand, whose family has run the Courir for generations, said the tradition was brought to Louisiana by the early French settlers.

“They would go door-to-door begging and singing for chickens, pork fat, a little bit of potatoes, rice….,” David Bertrand said. “In return you were invited to a big ball with people dressed in costumes, some with masks and gloves.”

Today Cajun communities have developed their own celebrations, some incorporating children’s runs a few days before Mardi Gras and others letting women join the run. The Elton Courir de Mardi Gras remains an all male run though women and children often follow the run as spectators.

In the early 20th century, the rural Mardi Gras tradition was very strong in Elton with the town hosting two Mardi Gras runs each year. One which ran north of town and one that ran south of town.

By the time David Bertrand was a young man, the local Mardi Gras had nearly disappeared. He has spent years trying to preserve this unique part of his family history and the Cajun culture.

His great uncle Asa Buller was among the founders of the Elton Courir de Mardi Gras which ran for many years, taking a hiatus during World War II.

The run was revived in the late 1980s and still continues today with younger generations taking the role of their ancestors, David Bertrand said.

“It seems like there is a more preservation mentality now, especially among the millennials to try to preserve some of the Cajun heritage that has been lost, whether it’s the music or the Mardi Gras runs,” David Bertrand said. “And it is good to pass the torch on to young people.”

Keeping with tradition, the run usually starts at daybreak and ends by late afternoon with enough ingredients to cook a large gumbo.

The costumes are as important a part of the ritual as chasing the chicken. The men don colorful, handmade costumes covered with patches and fringe, topped with a tall pointed hat known as a capuchon and a wire mesh or cloth mask to conceal their identity.

Austin Bertrand, 27, who has been running since he was a teenager, remembers how important Mardi Gras has always been in his family.

“I did it because it was something all the family did,” Austin Bertrand said. “In my family it is as big as Christmas or Easter. It’s an important holiday.”

Today, Austin Bertrand is part of the younger generation trying to keep the tradition alive,

“It’s a dying tradition, like Cajun music,” he said. “We are trying to get more people involved each year and try to get the young ones involved.”

This year’s Elton Courir de Mardi Gras will be held on Saturday, Feb. 26. The run will begin at 7 a.m. with a prayer and blessing at the St. Paul Catholic Church in Elton before a brief stop to kneel and sing at the grave sites of their ancestors.

The route will then continue through the countryside where 6-8 stops will be made to chase chickens and dance and beg for ingredients.

— By Doris Maricle, Special to The Leader from the American Press in Lake Charles, Louisiana.