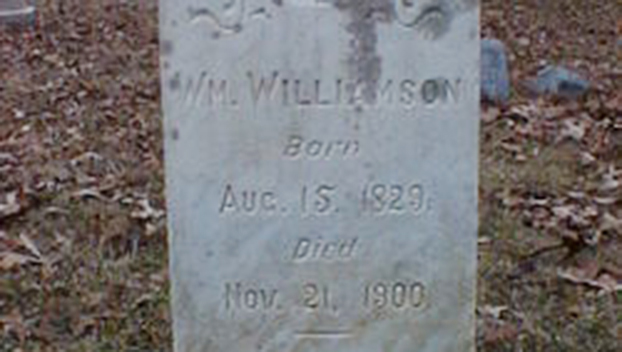 On the 150th anniversary of his birth, the Orange County Historical Commission dedicated a marker giving a brief history of the Williamson Settlement started by William Williamson.

Williamson was born in Morgan City, Louisiana. As a young man he worked on a large cattle ranch in Louisiana. He met and married Joissine Demarias from Welch, Louisiana. They established their first home in Lacassine, Louisiana, where the first six of their 15 children were born.

At the age of 33, Williamson enlisted in the Confederate army. He served from September 1962 to May 1865 as a member of Captain Bailey Vincent’s Company Scouts and Guards. It was logical for him to join a calvary unit, as he had done a great amount of horse riding and was an excellent horseman. He rode off to war and returned home after the war on his own horse.

After the war, at age 36, he moved his family by wagon and drove his cattle to Orange County, Texas, where he had bought “Squatter’s Rights” on a log house on a tract of public land in northern Orange County near the Jasper County line.

This was the beginning of what would become the Williamson Settlement. It was also the home where the other nine of his children were born.

Williamson believed in education and sent his children to school. He served as a school trustee and also allowed his home to be used as a gathering place for community, social and church meetings. Baptist preachers held services in his home. He was very generous with his time and meager possessions.

On April 20, 1900, he and his wife, Joissine, were baptized into the Church of Jesus Christ of Latter-Day Saints. They were the first in Orange County to do so. This was the beginning of the LDS church in Orange County.

The first church building was made of logs cut from the nearby virgin pine forest in late 1901 or early 1902. In 1915 a frame building was erected on an acre of land donated by Joseph Williamson, the seventh son of William.

The area became known as Williamson Settlement. It is an unincorporated community in northern Orange County and south Jasper County. The present day church sits in the approximate center of the community.

From the time of its settlement there has been little significant business in the community. For many years it was open range. During the Depression years, some families made a living by dairying and operating milk trucks.

For a time, there was one grocery-feed-gas country store. Citizens commuted then and now for employment and shopping. There has never been a post office in the settlement.

In 1890 following the accidental death of his youngest son, Abasolom, William sought a graveyard location. He declared he had found an ideal location and that some day a public road would go by there. At that time there was not a wagon road or trail passing the graveyard.

In 1909 two of his sons, Caleb and Joseph, deeded a quit claim for a 30 foot wide right-of-way across the William Williamson survey. Today this is part of FM 105 passing in front of Williamson Cemetery. The cemetery is in use today as a free burial place serving a large area of Orange County.

The Williamson Ward of the LDS Church is located about midway between Vidor and Evadale on the corner of FM 105 and Aunt Sadie Road. It is a brick building of more than 14,500 square feet with a membership nearing 1,000. The building also houses the Beaumont Stake Genealogical Library.

William Williamson has well over 1,000 descendants scattered over more than 20 states and in at least two foreign countries.

When his health began to fail, he moved to the Old Laurel Community to be near his doctor. He died there in November, 1900 of “Bright’s” disease.

The marker placed by the Orange County Historical Commission recognizes Williamson as the first convert to the LDS church in Orange County, which was the beginning of continuous growth from a small number in a log church to the large enrollment in the present day brick church.

The year the marker was dedicated was the 40th anniversary of the William Williamson Family Genealogical Society, which was formed in 1938.