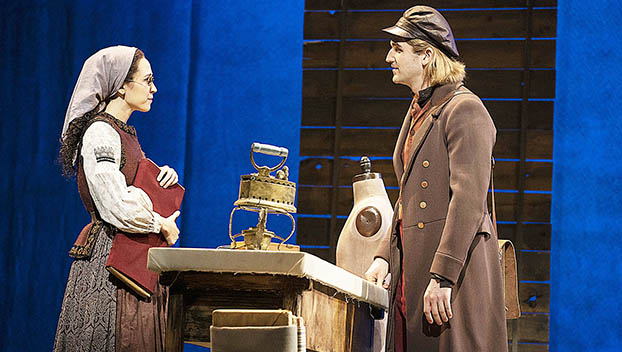 Noa Luz Barenblat (Chava) and Jack O'Brien (Fyedka) star in the North American Tour of Fiddler on the Roof. The show will grace the stage at Lutcher Theater at 7 p.m. Sunday/March 6. (Photo by Joan Marcus )

Noa Luz Barenblat is familiar with Texas as she grew up in San Antonio before leaving for college in Ohio.

She graduated from Baldwin Wallace University Conservatory of Music in Berea, Ohio.

However, she is returning to her home state when she portrays Chava in Fiddler on the Roof at 7 p.m. on Sunday, March 6, at Lutcher Theater.

Chava is Tevye and Golde’s third daughter, and falls in love with Fyedka, a Russian, and is ordered to “never see him again.”

“She is incredible brave at 15 years old to stand up and use her voice,” Barenblat said about the character. “She marries for love, which was revolutionary and unheard of in the time period.”

Tony Award-nominated Broadway revival of Fiddler on the Roof is the heartwarming story of fathers and daughters, husbands and wives, and life, love and laughter.

Barenblat was specially called in by the casting director to audition for the role. A role which is her first with a national tour.

“I graduated in May 2019 and then moved to New York City,” Barenblat said. “I started rehearsals for the show in July.”

It was during the tour that the pandemic struck, and theaters closed the curtains and started the longest intermission.

“It is incredible to come back after a year and a half,” Barenblat said. “We were in Detroit when we first started hearing about COVID and were told to return to our points of origin for a few weeks. Those few weeks turned into a year and a half.”

The show is based on traditions of a Jewish family in and around 1905.

“What makes this show different from other productions is the choreography,” Barenblat said. “Israeli choreographer Hofesh Shechter made the routines very different, grounded. Almost ancient in that our body tells the story. It brings new life to the movements. The audience will still see the iconic wedding dance.”

Barenblat added she was thrilled to work with the director and assistant director of the show.

Fiddler on the Roof is directed by Tony Award-winner Bartlett Sher (South Pacific, The King and I); choreographed by Shechter; inspired by the original choreography of Jerome Robbins; and has musical direction by Ted Sperling.

“They really helped bring out the humanity of the character,” Barenblat said.

While she grew up watching the film version, she was amazed to discover the number of Fiddler fans when she joined the tour.

“It was one of the earliest films I remember seeing,” Barenblat said. “Being so young, I saw it from a different perspective than I do today. I was familiar with the story and it is really special to me.”

This classic musical is rich with Broadway hits, including “To Life (L’Chaim!),” “If I Were A Rich Man,” “Sunrise Sunset,” “Matchmaker, Matchmaker” and “Tradition.”

“Character wise, Chava is amazing as she is very intellectual, loves to learn and read but is also a romantic who sees the world in a special way,” Barenblat said.

The original Broadway production of Fiddler on the Roof, which opened in 1964, was the first musical in history to surpass 3,000 performances. The show won the 1965 Tony Award for Best Musical in addition to eight other Tony Awards that year. This acclaimed revival proudly introduces a new generation to the iconic musical adored across the globe.