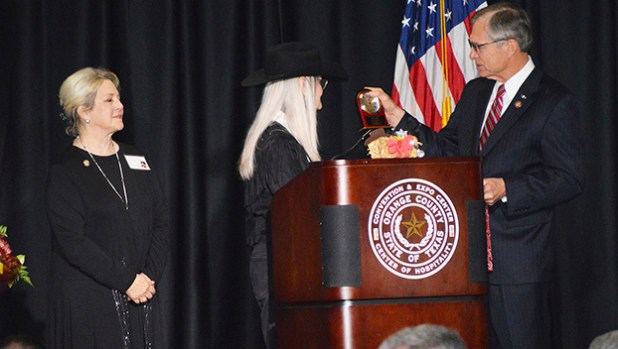 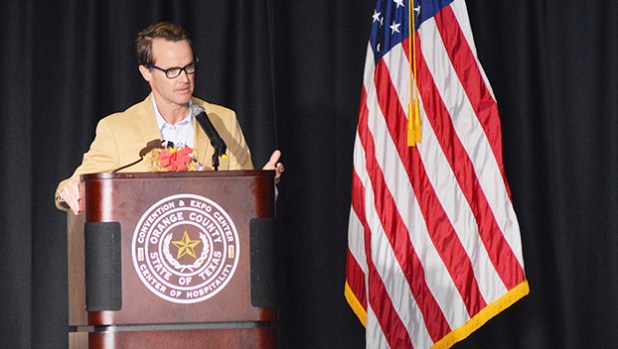 Texas Speaker of the House Dade Phelan said Orange County had a lot going for it during remarks Saturday. (Dawn Burleigh/Orange Leader) 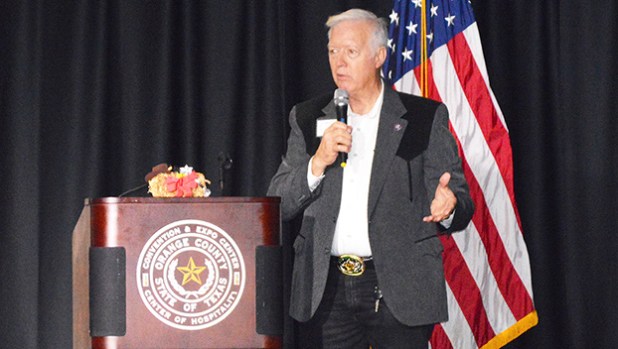 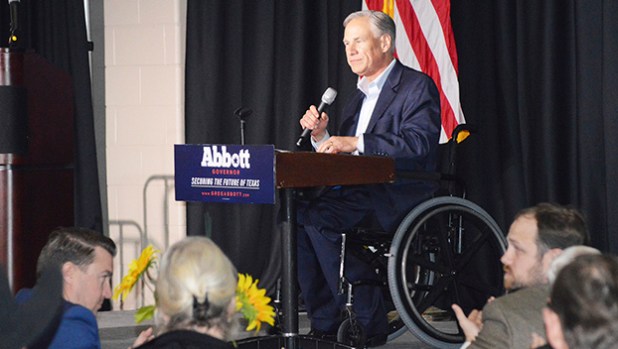 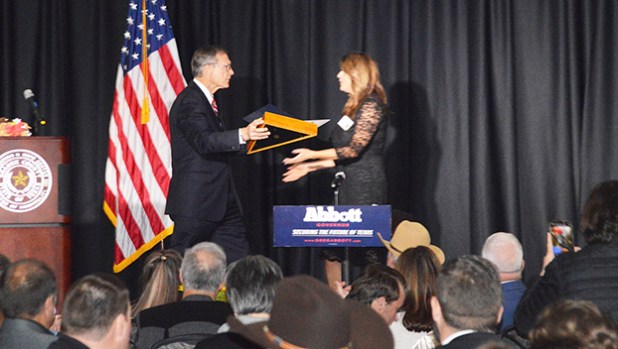 An Orange woman had her chance to shine among state leaders recently when she was recognized for her exemplary service as executive director of Orange County Disaster Rebuild.

Orange County Disaster Rebuild Executive Director and Orange County Emergency Management Special Projects/Communications Coordinator Michelle Tubbleville was presented by Congressman Brian Babin with a Certificate of Special Congressional Recognition and she received a flag that was flown over the United States Capitol. She was awarded the recognition during Saturday’s Orange County Republican Party Round-up.

Babin was also recognized by the Orange County party for his years of service to the district. Due to redistricting, this is his final year to represent Orange County. Trudy Pellerin presented Babin with an award of appreciation and presented Roxanne Babin with flowers.

“This will be the last dinner I attend as your representative,” Brian Babin said.

“Bonds never end,” Roxanne Babin said. “We will miss you. We will still be around and you will always be in our hearts.”

“Last year, two million illegals crossed the border,” Babin said. “That is higher than the population of 10 states. The Arizona governor classifies it as an invasion. Under the constitution, we have the right to protect from an invasion. I hope other states do more to protect us from the onslaught.”

He added Texas is 180 degrees different than Washington DC.

“What is happening is more than political or one man,” he said. “It happened over several years and under both parties.”

“If I was king for a day, I would put prayer back in school and the Ten Commandments on the wall,” Weber said. “We need to get values back. We need to get our country back.”

He also asked, “Are we teaching the next generation respect for teachers? Respect for police? About the greatest generation?”

Texas Speaker of the House Dade Phelan pointed out that no governor has been in Southeast Texas as much as Abbott.

“We get it done,” Phelan said. “It is why we are known as the resilient part of Texas. We come back better.”

Phelan added other states are now looking at Texas because of the election integrity bill passed.

Phelan added Orange County has so much going for it.

Abbott thanked the crowd for helping him make history. He had the highest number of votes and the highest percentage of votes in the last election due to Orange County.

“If every county was like Orange County, Texas would be great,” Abbott said. “The upcoming elections are what Republicans stand for versus what Democrats stand for.”

Abbott also added under his tenure as governor, Texas has been selected as the best state for business every year and Texas has won the Governors Cup for most economic development.

“Texas is also the best state to start a small business,” Abbott said. “Even under COVID, Texas continues to grow and is now the ninth largest economy in the entire world.”

“That makes me more powerful than Putin,” Abbott said jokingly.

“I am running to keep Texas No. 1,” Abbott said after the crowd stopped chuckling at the pervious comment.

“No governor provided more resources for schools than me,” Abbott said “No government program can replace parents. Parents matter and we need to make parents primary in healthcare and education matters.”