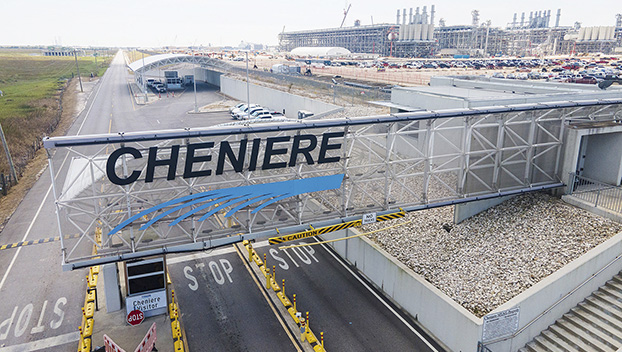 CAMERON PARISH, Louisiana — Cheniere Energy reached a milestone at its Sabine Pass liquefied natural gas facility with the completion of the sixth train.

The announcement was made recently and comes ahead of schedule, officials said. 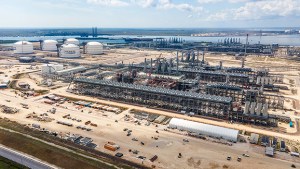 Train 6 at the Sabine Pass Liquefaction Facility in October of 2021. (Photo courtesy of Cheniere)

What does this mean for the city, area and beyond?

Collectively it means thousands of construction jobs in the last few years, Maas Hinz, vice president and general manager of the Sabine Pass site, said. There are approximately 800 permanent jobs with the company and contractors that support the facility.

Hundreds of thousands of dollars are invested in local communities and in local students, he added.

“This facility is global in significance. We are the second largest LNG facility in the world,” Hinz said.

The facility averages approximately 30 million tons every year of “clean natural gas” to 37 countries around the world and in doing so displaces coal and that creates a much less carbon intensive fuel.

Stephanie Knapik, advisor, corporate branding and communications, said LNG is currently in high demand, and now with the train completed ahead of schedule is a plus as it comes at a time the world needs it.

Sabine Pass Port Authority Manager Mic Coward said while the completion of the train doesn’t directly affect the port, which is on the Texas side of the Sabine Neches Ship Channel, it is beneficial.

“Even though they are in Louisiana, any commerce on the Sabine Neches waterway is a benefit to the whole area,” Cowart said. “And overall Cheniere has been a good corporate citizen as far as Sabine Pass is involved.”

Communication between the facility and residents of Sabine Pass is good and when there is an issue of importance to the community, they are notified.

Hinz said in addition to the completion of the sixth train, construction is still progressing on a third berth at the Sabine Pass site. The berth should be completed next year, he said.

“The accelerated completion of Train 6 once again reflects the world-class standard of execution consistently achieved by the Cheniere and Bechtel teams, and we are proud to have the six train vision of Sabine Pass completed safely, ahead of schedule and on budget,” Jack Fusco, Chairman, President and CEO of Cheniere Partners, said. “With nine total trains across both the Sabine Pass and Corpus Christi projects, the Cheniere liquefaction platform is the second largest in the world, reliably providing our global customer base with clean, secure and affordable energy. We look forward to opportunities to build upon our platform with disciplined, brownfield growth at both sites in the future.”