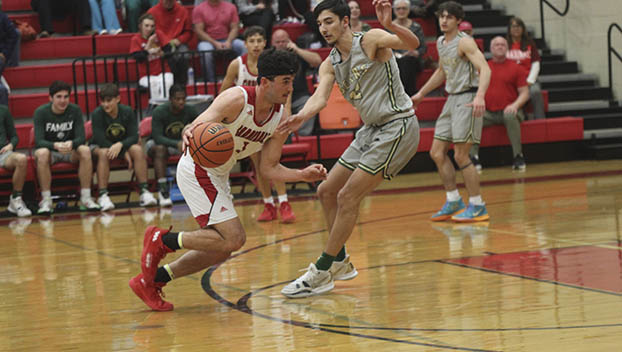 BRIDGE CITY – In a nice tuneup before the Class 4A Region III basketball playoffs start next week, the Little Cypress-Mauriceville Bears went on the road Tuesday night to fight off the Bridge City Cardinals 56-49 to wrap up the District 22-4A regular season.

The Bears (22-11, 8-4) controlled the game almost the entire night, though the Cardinals (1-11 in district) made a nice run late in the fourth quarter.

Behind the hot hands of Ben Elliott and Alantheon Winn, the Bears increased a 21-18 halftime lead to 42-30 entering the fourth quarter.

The Cardinals, led by shooting guard Walker Britten, battled to within six points a couple times and a big three-pointer by Britten with 1:33 remaining trimmed the Bear’s cushion to just 54-49 with 1:33 left.

However, the Bears rose up on defense the next several trips and Elliott, who had eight points in the fourth, pushed the lead back to 56-49 as the Bears were able to hang on to nail down the victory.

Elliott powered the LC-M arsenal with a nice double-double, finishing with 24 points and 10 rebounds.

Winn tallied 16 points, racked up six rebounds and had three rim-rattling dunks, while Elliott also had a dunk.

The Bears won the dunk contest 4-0. The Cardinals won the three-point battle as they buried eight on the night and the Bears had one.

Just like he did at West Orange-Stark last week in which he scored 19 second-half points, Britten found the range again for the Cardinals. Against the Bears he finished with 16 points, 13 in the second half, when he buried three of his four three-pointers.

Noah Fuller chimed in with eight points and five rebounds for the Bears while post Miguel Molina collected six points and eight boards.

The Bears finished with a 38-30 rebounding edge.

The Bears led 11-8 after the first quarter with Elliott scoring six points while Oceguera had five for BC.

The Bears maintained their three-point lead at the half, sparked by six points from Winn in the second quarter, including two electrifying dunks.

LC-M went on a 21-12 tear in the third quarter with Elliott (eight points) and Winn (five points) leading the way. Britten had five points for the Cardinals.

The Bears, the third-place squad out of 22-4A, will await their bidistrict playoff opponent and will start the postseason either Monday or Tuesday next week.