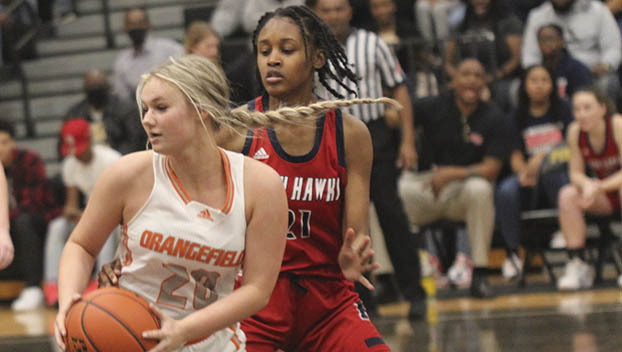 Orangefield’s Kenadie DuBois (20) gets pressured by Hardin-Jefferson’s India McMahon during the first half at Vidor High School. (Van Wade/Orange Leader)

VIDOR – As usual, the Orangefield Lady Bobcats battled with tremendous heart, but this time they were just overmatched by the state’s No. 2-ranked Class 4A team in the bidistrict round of the Class 3A Region III playoffs at Vidor High School Monday night.

The Hardin-Jefferson Lady Hawks, led by Duke University signee Ashlon Jackson, rolled past the Lady Bobcats 101-33 to move on to the area round.

Jackson led the District 21-4A champion Lady Hawks with a whopping 33 points as she matched the Orangefield team total. Jackson fired in six three-pointers, including five in the third quarter in which she scored 19 of her points in.

The Lady Hawks (32-4) full-court pressured the Lady Bobcats, who were the fourth-place playoff unit out of 22-4A, for most of the first half and used a half court press in the second half and both paid dividends.

Hardin-Jefferson wore down the Lady Bobcats, forcing them into 32 turnovers.

The Lady Hawks snared a 25-10 advantage by the end of the first quarter and went on a 31-4 spurt in the second period to lead 46-14 at intermission.

Hardin-Jefferson went on a 37-10 spurt in the third quarter as Jackson caught on fire with her five three-point missiles in the period.

The Lady Hawks continued to half-court press in the fourth quarter to get to the 100-point barrier as they outscored Orangefield 18-10.

The much taller Lady Hawks finished with a commanding 37-12 rebounding edge.

The Lady Hawks finished with just eight turnovers. Orangefield was 5-of-9 from the free-throw line while Hardin-Jefferson drained 11-of-16.

The Lady Hawks move on to face either Navasota or Houston Yates in the area round later this week.