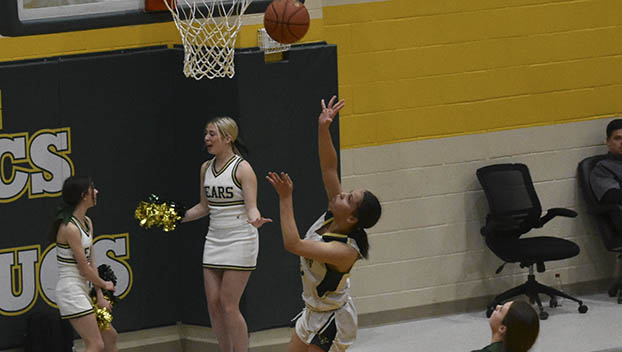 WINNIE – Chalk up a big ‘W’ for the Little Cypress-Mauriceville Lady Bears Monday night. The Lady Bears took down Livingston’s Lady Lions, 61-30, in dominating fashion in the Class 4A Region III bidistrict round of the playoffs at Buccaneer Gym at East Chambers High School.

LCM’s Asia Robinson got hot in the second quarter, scoring 12 points as the Lady Bears surged ahead to a 32-16 lead heading into the half.

The third quarter got underway with a quick three-pointer by Aniyah Robinson. Soon after, Keylie Washburn converted several layups on her way to nine third-quarter points. At the end of three, Little Cypress-Mauriceville was firmly in the driver’s seat with a 50-22 advantage.

Asia Robinson re-entered the game in the fourth quarter, scoring a quick seven points. The Lady Bears would coast on their way down the stretch to nail down the huge win, advancing to the next round of the playoffs.

Asia Robinson led the way in scoring for LCM with 26 points. She was followed by Washburn with 18 and Aniyah Robinson with 12.

Jon’toyrian McNeal had a team-high 18 points for Livingston.

Asked what he saw from his team Monday night, Little Cypress-Mauriceville head coach Eddie Michalko said, “Same thing they’ve been giving me – everything they’ve got. They just play hard all the time.”

The Lady Bears now move on to the area round later this week and will face either Houston Washington or Bellville.