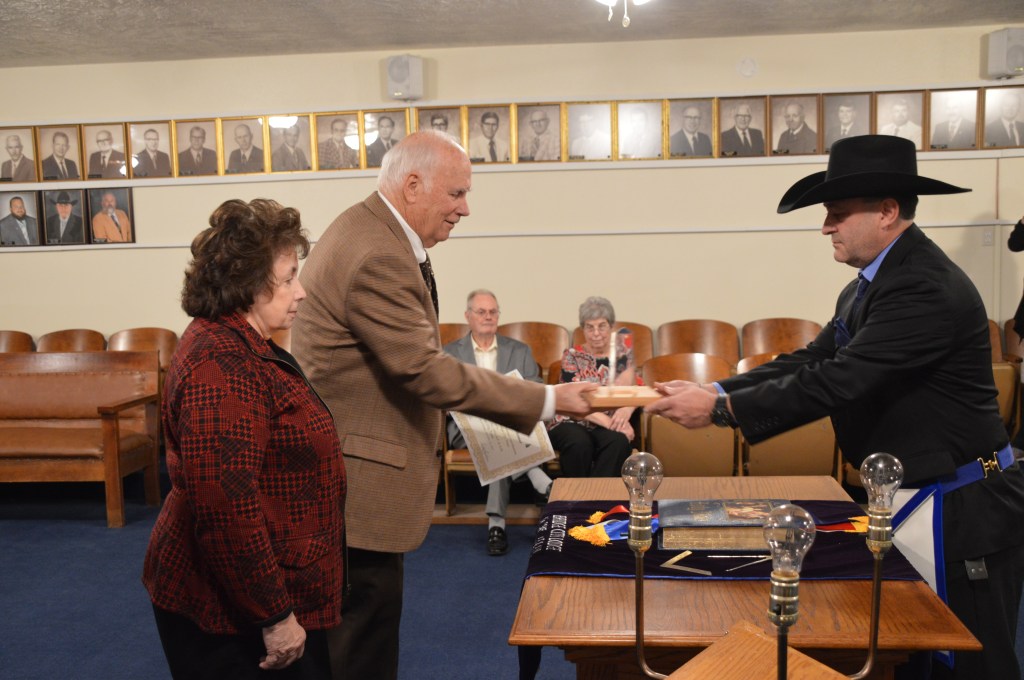 Dawn Burleigh/Orange Leader Mark Messer DDS, with his wife Becky, accepts the Building Community Award from District Deputy Grand Master District 25-A Tuner Barnes on Thursday night at the Bridge City Masonic Lodge #1345. The award is the highest honor a non-Mason can receive.

Mark Messer DDS was honored with the highest award a non-Mason can receive from the Masonic Lodge – the Building Community Award.

The Golden Trowel Award is the highest award that a Lodge can bestow upon a Brother Mason.

“This award is given to a non-mason in the community for the Mason like values they have shown,” Worshipful Master Lennon Kuykendall said. “I first heard the name Messer when I moved to Bridge City when I was 18. The name is synonymous with Bridge City.”

Messer served in the Navy and Marines.

“He owned more than one practice,” Kuykendall said. “He moved here in 1975 and opened a practice. He is also married for 54 plus years.”

Messer served the community through a Candy Buy Back program to send candy to troops stationed overseas, donated to St. Jude’s and donated land to the Bridge City Police Department.

His practice, Advanced Dental was Business of the Year. Through his practice he offered free services such as Smiles on Wheels dentistry day at the Bridge City Middle School and the Heart Free Dentistry Day at the office.

“He made the time to make it all come together,” Kuykendall said. “And still at it.”

When the district manager for the Lodge was asked to present the award, he said it calendar was booked at the time but made sure he could clear it for the honor.

“It is an honor and a privilege to present this to you today,” District Deputy Grand Master District 25-A Tuner Barnes said. “This award is a means for Lodges to honor and recognize members of the community with formal recognition of how they demonstrate honor without expecting honor or recognition for what they do.”

Messer, with his wife, Becky, accepted the award presented to him at the Bridge City Masonic Lodge #1345 on Thursday night.

“Thank you for this honor,” Messer said. “I fell in love with Bridge City when we moved here. It has been good to us and we try to be good back to it.”

He introduced his children and grandchildren in attendance. One son was unable to attend due to work.

“I love Bridge City and the people in Bridge City,” Messer said. “Thank you for the honor.”