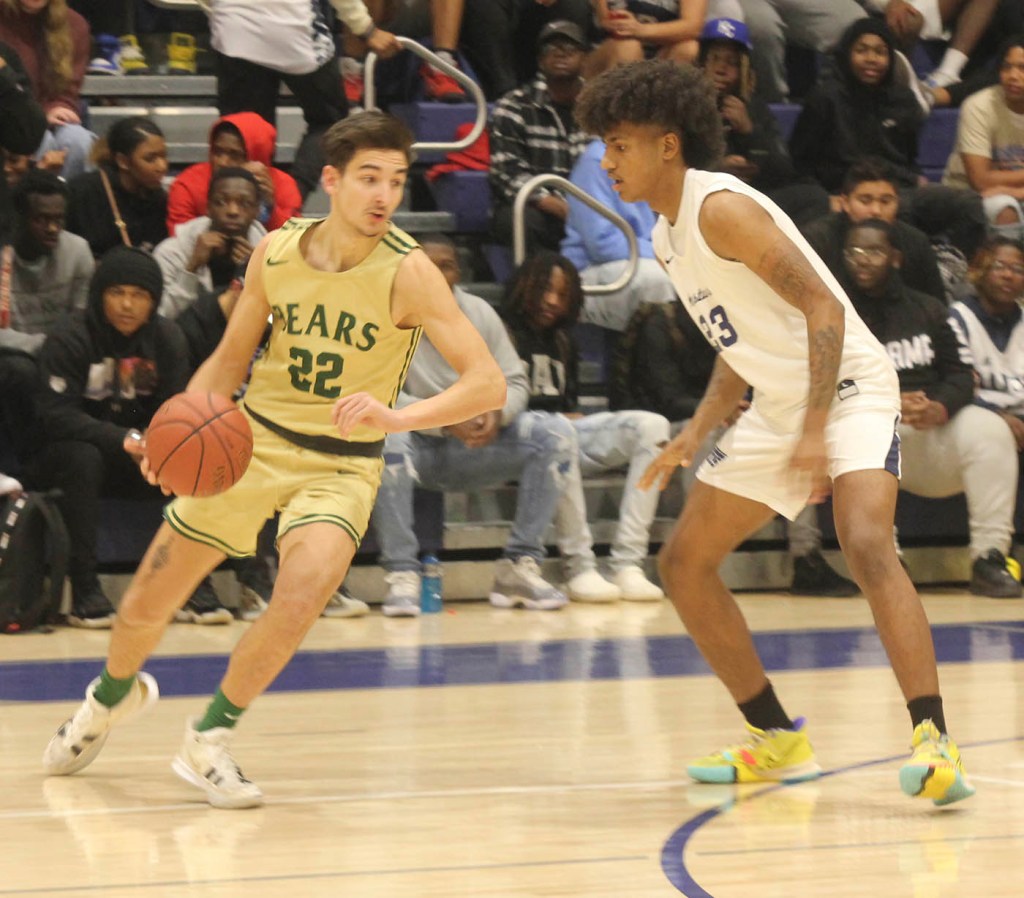 Van Wade/Orange Leader LC-M’s Ben Elliott looks to get past the defense of WO-S’ Michael Wardlow at Mustang Gym. Both players led their respective teams in scoring.

WEST ORANGE – Little Cypress-Mauriceville made it a clean sweep of West Orange-Stark in District 22-4A play as the Bears went on the road and downed the Mustangs 64-57 at Mustang Gym.

The win not only gave the Bears their 20th win of the season but they improved to 6-2 in 22-4A play to remain in second-place behind second-ranked Silsbee while the Mustangs dropped to 4-3 and are a half game back of third-place Orangefield (5-3), which downed Bridge City 77-47 Friday.

The Bears led the Mustangs after every quarter but had to sweat it out down the stretch.

LC-M’s biggest lead came with 4:10 remaining when they led 53-42. However, the Bears’ leading scorer on the season Ben Elliott fouled out with 3:58 remaining after finishing with a double-double with 18 points and 12 rebounds.

The Mustangs went on a 7-0 run, sparked by Michael Wardlow, to trim it to 53-49 with 3:02 left. Wardlow finished with a game-high 19 points to go along with six rebounds.

The Bears, despite battling turnovers throughout, were able to hang on down in the waning minutes by draining big-time free-throws. The Bears were 11-of-14 from the charity stripe in the fourth quarter with Alantheon Winn, Da’Marion Morris and Miguel Molina teaming up to bury 8-of-10 from the line.

A big key for the Bears was their dominance on the glass as they outrebounded the Mustangs 48-30. WO-S hung tight though with its tenacious defense, one that forced the Bears into 26 turnovers. The Mustangs had just 11 turnovers on the night.

Post Rocedric Pappillion had a double-double for the Mustangs with 15 points and 11 rebounds before fouling out in the fourth while Darren Anderson added seven points and five rebounds.

The two teams combined to shoot 34 free-throws in the fourth quarter.

LC-M will have its bye Tuesday before hosting Vidor Feb. 4. The Mustangs will travel to Vidor Tuesday.