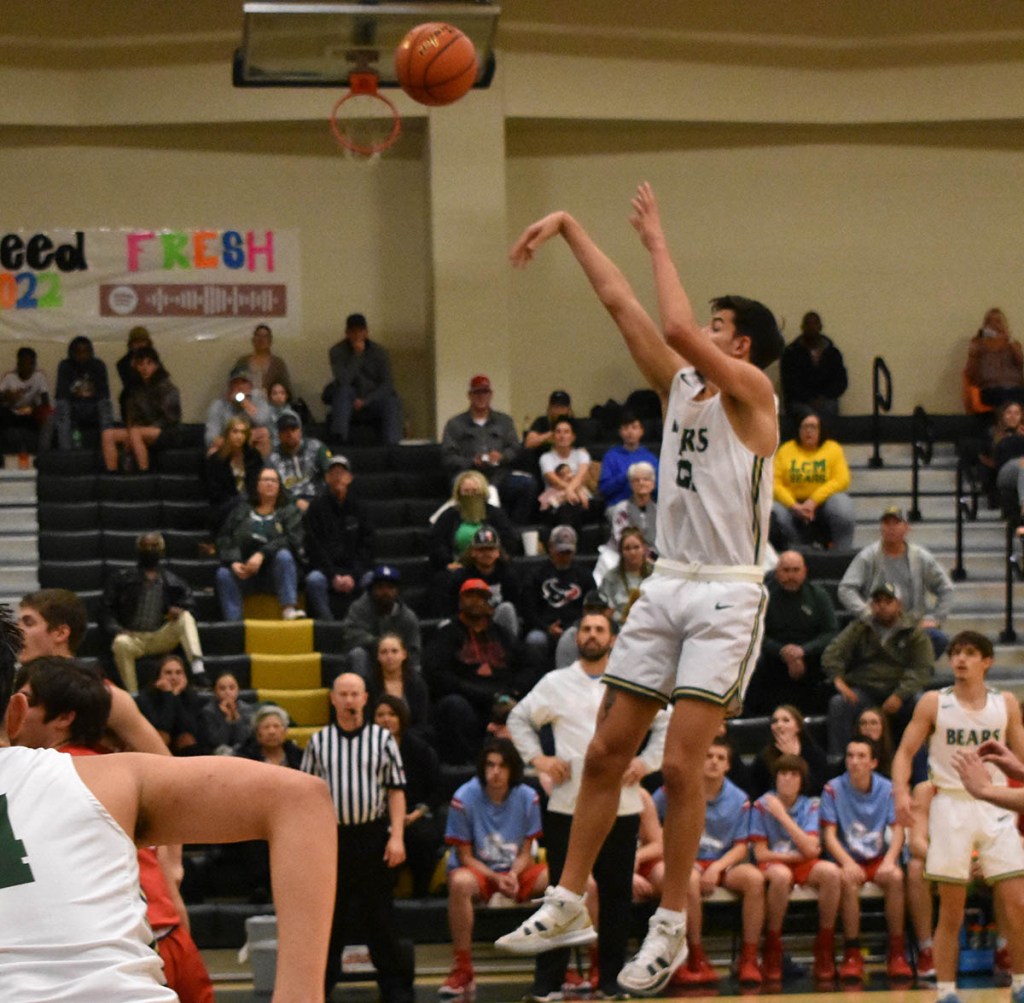 Keagan Smith/Orange Leader LC-M’s Ben Elliott fires up a shot against Lumberton at The Grove. Elliott finished with a game-high 35 points.

LITTLE CYPRESS – In a duel that included two individual 30-point performances, the Little Cypress-Mauriceville Bears beat the Lumberton Raiders, 77-61 in District 22-4A action at The Grove Tuesday night.

The Raiders (2-5 in district) took their opponent by surprise and jumped out to an early lead. Lumberton stayed ahead of the Bears (19-9, 5-2) for most of the first quarter, but Ben Elliot drained a three with a minute left to give LCM their first lead of the game. They would not relinquish it for the rest of the night.

The Bears started to heat up in the second quarter. Elliot led the way with nine of LCM’s 19 points as they went up 33-25 at the half.

Lumberton’s offense shot the ball more efficiently after halftime. Senior guard Cade Harmon had a big quarter with 12 points as he shouldered much of the offensive load. However, Elliot and sophomore Alantheon Winn combined for 17 points for the Bears, and the LCM stayed ahead 54-42.

The Raiders would bring the game within seven points with five minutes left in the fourth quarter. Right as the momentum started to shift, Elliot and Winn threw down a dunk on three consecutive possessions – ending any hopes of a Lumberton comeback. Firmly in the driverr’s seat, the Bears would go on to win 77-61 in a strong showing.

Elliot put up a monster stat line for LCM with 35 points, eight rebounds and three steals. Winn was second in scoring for the Bears with 19 points, followed by Da’Marion Morris’ 14.

Harmon led the Raiders in scoring with 30 points plus six assists. Aidan Millican finished second on the team with 10 points.

The Bears will be seeking their third consecutive win as they travel to West Orange-Stark Friday.

Lumberton moves down to 2-5 in 22-4A as they seek to rebound at home against Vidor Friday.