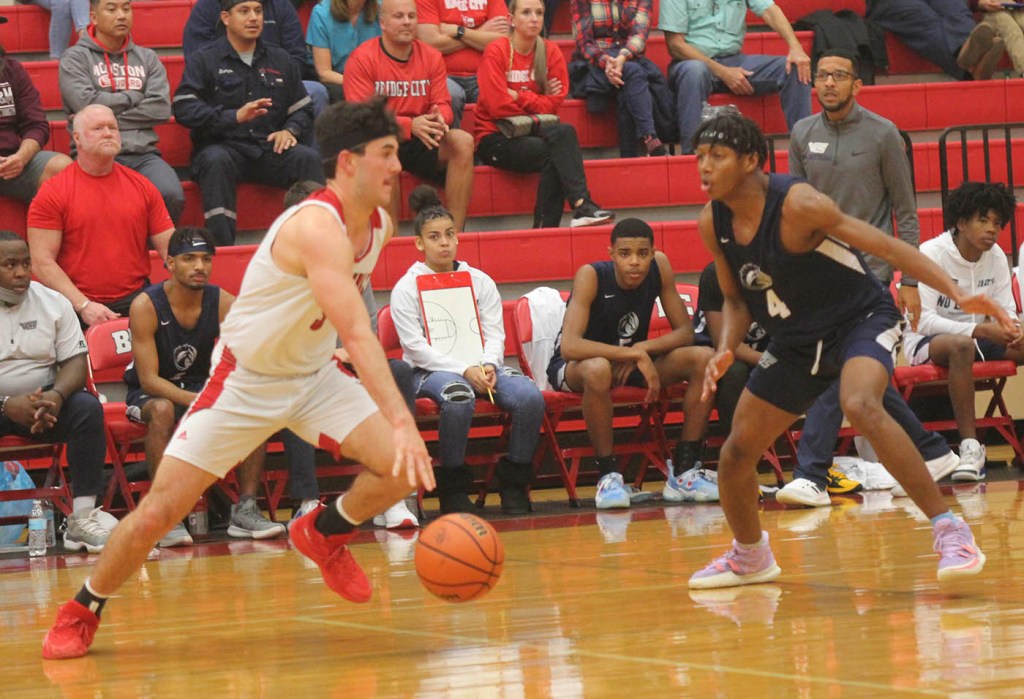 BRIDGE CITY – After getting behind by double-digits in the early going, the West Orange-Stark Mustangs put on the afterburners against Bridge City as they got past the Cardinals 77-56 in District 22-4A play at Cardinal Gym Tuesday night.

Ethan Oceguera paced the Cardinal arsenal with 14 points to go along with eight rebounds. Walker Britten and Rayburn Herbert each had three three-pointers apiece and both finished with 11 points. Fernando Rodriguez added eight points for the Cardinals while Lincoln Breaux grabbed six rebounds.

The Mustangs (3-2 in district play) found themselves down to the Cardinals (0-5 in district play) as much as 13-2 in the first quarter but they bounced back to finish the quarter with a 12-4 run to pull to within 17-14 by the end of the period.

The Mustangs put on the defensive intensity in the second quarter, forcing the Cardinals into nine turnovers as they went on a 24-15 run to lead 38-32 at the half.

Wardlow and Pappillion had seven points apiece in the quarter for the Mustangs while Oceguera had six for the Cardinals.

The Mustangs outscored the Cardinals 16-14 in the third quarter as Anderson fired in nine points in the period for WO-S. Britten hit a pair of three-pointers for the Cardinals as they trailed 54-46 entering the fourth quarter.

Bridge City got as close as 58-52 with a little over six minutes left but the Mustangs exploded on a 19-4 spurt to close out the game.

Wardlow had eight points for the Mustangs in the last eight minutes.

WO-S controlled the glass, outrebounding the Cardinals 35-22. Bridge City finished with 22 turnovers while the Mustangs had 14. WO-S was 5-of-6 from the free-throw line while Bridge City was 8-of-14.

The Mustangs return home to host Lumberton Friday to finish out the first half of 22-4A play while the Cardinals will be seeking their first district win with a trip to Little Cypress-Mauriceville.