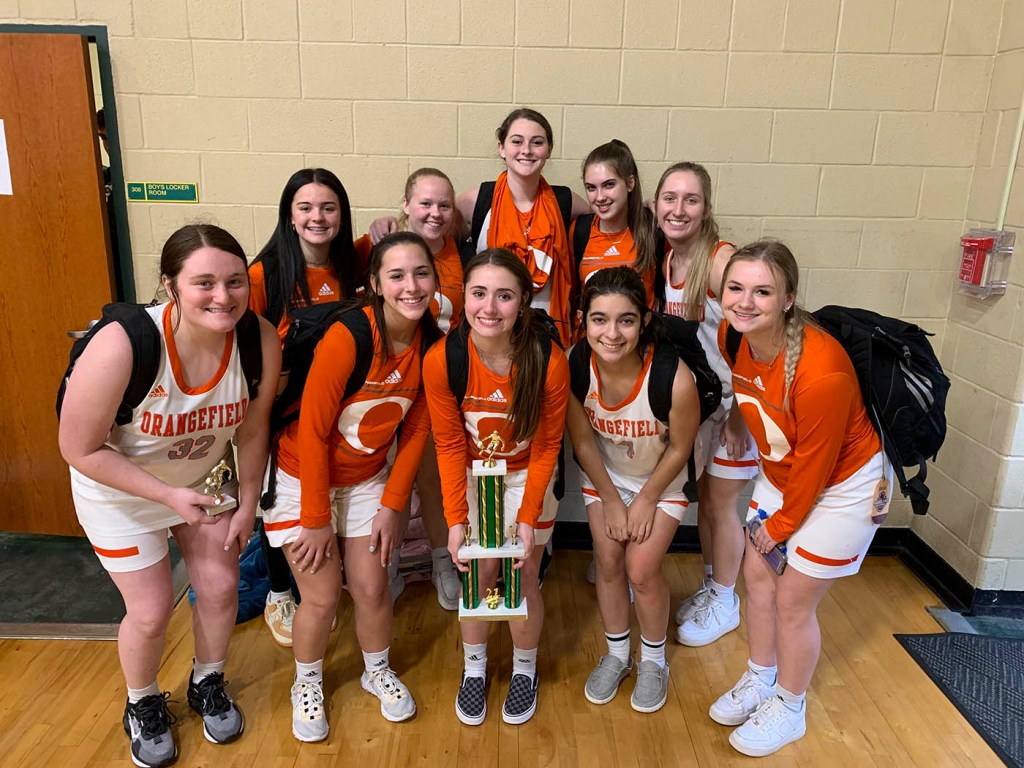 The Orangefield Lady Bobcats took home first-place in the Silver bracket at the East Chambers Tournament.

The Orangefield Lady Bobcats took a trip to East Chambers after Christmas to compete in the East Chambers Christmas Classic. They did not disappoint, and came home in 1st Place in the Silver Bracket.

Monday the Lady Bobcats were faced with two tough opponents. They took on the number 5 state ranked Woodville Lady Eagles and won in a nail biting victory. Harleigh Rawls led the game with 13 points and 2 assists. Madison Greenway put in 8 points and 6 rebounds. Joli Ponfick had 6 points and 4 rebounds. It was a great defensive win for the Bobcats with a total score of 32-30.

Later that evening, the Lady Bobcats took on Hitchcock. This was a game full of intensity and left fans and players on the edge of their seats. Harleigh Rawls continued to lead the team in this game as well with an impressive 18 points and 4 rebounds. Jaslyn Newman was right there with her with 13 points and 6 rebounds and 3 blocks. Greenlea Oldham had a double-double with 10 points and 10 rebounds. Kenadie DuBois had 8 points and 2 rebounds with 3 assists. Joli Ponfick put herself in the mix contributing 7 points, 3 assists, 5 rebounds and took 3 charges. In the end the Lady Bobcats came up short, 69-58.

Tuesday held two wins for the Lady Bobcats. First they faced the Liberty Lady Panthers. Greenlea Oldham had another double-double game with 14 points and 10 rebounds. Madison Greenway added 11 points and 3 rebounds and 2 assists. Harleigh Rawls made her presence known with 9 points, 3 assists and 3 rebounds. Jaslyn Newman had 7 points and 6 rebounds. They came out victorious in another close game ending in 48-42.

Next, the girls faced the Lady Pirates of Deweyville. This was a big team effort winning 45-35. Greenlea Oldham was the leading scorer with 16 points and had 8 rebounds. Madison Greenway chipped in 7 points and 5 rebounds while Harleigh Rawls had 7 points as well. Joli Ponfick made sure to put herself on the board with 5 points, 4 rebounds and 2 assists.

Entering into Wednesday’s championship day the Bobcats only played 1 game. They dominated the floor coming out with a 73-26 victory. Harleigh Rawls was an offensive force with 25 points. Greenlea Oldham had her third double-double of the week with 15 points and 15 rebounds. Joli Ponfick and Madison Greenway each had 8 points.

Harleigh Rawls was also chosen to the All-Tournament team.

The Lady Bobcats are breaking until Tuesday where they will travel to Bridge City looking for another district win.

FRANKLIN – The Orangefield Bobcats captured the third-place trophy at the Franklin Tournament with a tremendous showing.

Payton Wrinkle led the Bobcats with 18 points and also had eight rebounds. Pete Ragusa chimed in with 10 points while Zane Wrinkle had six points and Koen Maddox grabbed seven rebounds.

The Bobcats cruised past Tulosa-Midway 68-44 in their first game at the Franklin Tournament Monday.

The Bobcats came back later Monday and throttled Navasota 68-41.